You are here: Home / GameWyrd / Wyrd Reviews / Mansions and Manors

This is my third review of a Darkfuries floorplan set – and it’s not a redundant review. Each of these floorplans have evolved significantly from the one before. Previously I started by pointing out that although these are electronic floorplans that they are not packed as PDF documents. The floorplans come as a zipped up package of html files. There are pros can cons with this, as noted in the Inn and Tavern Floorplans review an important pro is that you only need to open up the image with interests you rather than having to open up a many megabyte spanning document. This becomes even more important for Mansions and Manors because this product introduces colour floorplans. However, as noted in the Temples and Shrines Floorplans review a niggling con is that its harder to print the whole product out. This becomes rather more annoying for Mansions and Manors since the level of detail increases significantly, adding NPCs as well as separate player and GM copies of maps. Although, having said that, in the author’s notes at the introductory page of the product there is a mention of a freeware printer utility available from a download link and perhaps that’s capable of the feat.

This set of floorplans carry the d20 logo. The reason for this is that the NPCs associated with the various mansions and Manors are detailed in d20 mechanics. For each floorplan set there is a small number of NPCs, ranging from just the Lord or Lady of the manner and one servant to a group of about half a dozen. The NPC races are taken from Darkfuries’ Maelstrom Fantasy Campaign setting. That’s fine with me. I don’t have the Maelstrom setting at hand and so the resulting effect is access to some quick NPCs, along with pictures for the important ones, an imaginative background and stats only slightly different from any given core race. The stats are close enough to keep unaltered if I find myself using these NPCs on the fly as a response to unexpected player actions (you know the sort – every second action they take). The backgrounds to the people are handy though; ne’er-do-wells tend to have mansions and Manors with secret passages and all sorts of hidden hideaways and I like the way that ties together cleanly even if the players never meet the NPCs or I choose not to use them. That latter point is worth singling out. You don’t need to use the NPCs to get an amazing amount of use out of the floorplans. In fact, given that the product just costs a couple of bucks, I think you only need to use one floorplan one time and you’ve had value for your money.

There are discrepancies in some of the floorplans though. The players’ copies of those florplans with hidden features are intentionally distorted to hide hidden features where it’s necessary. More often, though, the players’ copy of the floorplan can get away with simply omitting the hidden area. I love this. I doubt it would be economical to produce two copies of cardboard floorplans but here it just costs a couple of cents at the most, it just depends on how much a single print out costs you. Since these floorplans can be printed out again and again you are free to let your players scribble on their copy of the floorplan. If they want to mark in the secret area they’ve found or whether they want to try and workout where a secret area might be then they can and it shouldn’t be a problem.

In case you’re wondering the colour and black and white versions extend to both the player and GM copies. That means, in some cases, you have four different versions for one floorplan. Thankfully it’s easy to navigate around all of this since there are a set of gallery pages at the top of the index that present collections of large thumbnails of the different plans all on one page. There is a gallery for each of the Manors and mansions.

There are a total of seven buildings in the product. Even the smallest manner has at least three levels and every single building as an underground area. Some of the floorplans are rather large but this is because a deliberate effort has been made to keep them all on the same scale. I see the dilemma there, especially when the ground area is so large that it no longer fits entirely on my 1024×768 screen, but I think the right choice has been made. I’d much rather the game ran smoothly by ensuring there was no confusion then and there in exchange for some minor inconveniences when I’m reviewing the maps on the computer.

I’m continually impressed by the quality of these floorplans. I’m not the only one either, a quick peek at the best sellers list at RPGNow pretty much guarantees the presence of one of these Darkfuries products. 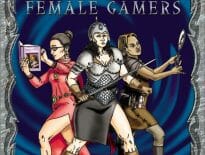 Wyrd Reviews The Slayer’s Guide to Female Gamers
wpDiscuzComment Author Info
Manage Cookie Consent
This site uses cookies 🍪, and links are ads that may earn bloggers some money 💰, and with this alert, I very much hope that these dark truths 🧌 are acknowledged.
Manage options Manage services Manage vendors Read more about these purposes
Preferences
{title} {title} {title}