I really rather liked the electronic edition of Darwin’s World so I wasn’t sure whether the new print edition would be able to maintain my enthusiasm. Worse, I was slightly worried that the book would actually start to spoil things for me. There’s more than just the PDF Darwin’s World in the book, highlights from the first couple of supplements are added in to ensure that the 128-paged softback book is complete. In fact, the electronic edition of the book is known as Darwin’s World Complete. Still with me? Good!

You’d be bloody hard pressed to find a book with the manufacturers code “0001” that’s as good as this “0001” product.

The introduction in the book serves as a very quick timeline. The timeline picks up at 1945, at the end of the second world war, from there things start to go wrong and by 2011 the world succumbs to nuclear and biological warfare. The nature of the apocalypse is that most cities have been reduced to radioactive ruins and mankind has changed beyond recognition. It’s no longer a case of mutants appearing in the bloodlines but of second and third generation mutations. This is Darwin’s World and so those most able to survive in the harsh world survive and their offspring start to pick up those physical quirks, those mutations, which made survival a little easier. There’s a downside to evolving as a mutant though. Those medicines and technologies that survived from the ‘Golden Age’ are designed for humans. Advanced medicine works only on pure blood humans and if you’re lucky enough to find a loaded gun among the ruins you can be sure it wasn’t designed for an eight fingered or tentacle hand. One of the changes from the d20 core rules is that the term “race” comes to mean human or mutant, rather, which generation of mutation the character belongs to. Actually, it’s more complicated than that, since there are types of human as well. If you’ve grown up feral in the wilderness or whether you were born into an isolated and protected community with access to all the wonders of the Golden Age also counts as a genetic trait.

The details of all these possible races are presented in the second chapter. It’s not quite as simple as the racial choices in the D&D core rules. You can have your main race; human, first, second or third generation of human and then you apply a genetic origin as well. Your genetic origins will impact your attributes and your favourite class. Both ‘main race’ and genetic origin can give you a level modifier. Level modifiers adjust how many experience points you need in order to progress a character level. I think the system works; in fact it provides a rather nice degree of flexibility and its one of the reasons why the initial Darwin’s World appealed to me but I think there should have been a more clear distinction between the two types in the paper product.

Classes are cut and dry. They’re what you’re used to in terms of mechanics and layout and basic character classes suitable for the post-apocalyptic are introduced. There’s not as many classes available compared to those world settings where there’s magic but don’t let that put you off. There’s plenty of classes, they cover pretty much everything you’d expect to count in such a setting and when combined with the double race effect from the previous chapter you’ll find there’s more than enough to keep your players happy. It seems a silly thing but I wish there had been an illustration for every character class.

Skills and feats have a chapter together. Skills introduced by the book are either entirely new or ones that have changed significantly from the core rules. It’s also worth noting that there are some skills that don’t exist/apply in the Darwin’s World future. There are just over twenty new feats in the book and this combines with a list of those feats from the core rules that are applicable to the game. As with the skills, some feats suit Darwin’s World and some don’t. A look at some of the new feats show that the prerequisites can be rather tough (JuJu man requires Con 18) but this is a reflection of the natural way the races in Darwin’s World tend towards a specialised role.

Mutations are easy to deal with. Your character race defines just how many mutations and defects your character is due. Mutations are good and defects are bad, although both may have special notes and exceptions. If you’re likely to gain more through mutations than you are through defects then it’s likely you’ll be looking at a level modifier to slow the rate of your advancement. Mutations and defects come in three main categories; major, moderate and minor. They tend to pair off; if your character qualifies for major mutations then she also qualifies for major defects. I think mutations tend to have either a sci-fi or even dark comic book feel about them the defects tend to have a medical nature about them. Defects include the likes of Anaphylaxis, Cystic Fibrosis or Pituitary Deformation. This weirds me out slightly, I’d advice careful selection of Defects so they don’t bring too much of a downer to the game.

There are chapters of equipment in the book; guns, melee weapons, armour, trinkets, adapted stuff, “relics” from the ancient age, medical wonders, food, a clever colour coded system of generic passkeys, books, vehicles and a range of adventuring tools. There is a cash economy of sorts in Darwin’s World and so all these come with price tags as well as suitable game mechanics. Such of this stuff also comes with a random find index. If your players take to rooting around wherever they happen to end up – as they will very likely learn to do – then you’ve got access to a handy d100 roll alongside the summary of equipment to help you decide what they find. These indexes are very often divided in to three sections of relative power so if you only want minor trinkets to be available then that’s all that’s there. The pictures of the advanced weapons are done in a sort of computer display style; rather than the technically adapt pictures of guns you find in some of those RPG supplements that cater to gun fanatics wherever bolt and screw is drawn to specification the guns in Darwin’s World appear, I think, a bit like they would if you were viewing a quick computer generated image of them in some catalogue (or perhaps playing Doom). I have slightly mixed feelings about this, I can see how this rather more simple style means that the busy artist has time to produce more illustrations and that’s a good thing but the style does contrast to the nitty-gritty pictures elsewhere in the book.

With the exception of introduction chapters I think Darwin’s World has the smallest chapter ever. Chapter 8 is on General Dangers and is a single, double sided, page in length. Don’t let that fool you though. The quick summary of things like gamma radiation is one of the most valuable GM assists in the book. Such dangers should be part of daily life in the twisted earth and they’re presented here in a GM friendly format.

The following chapter takes much of its content from the PDF supplements that followed the initial electronic Darwin’s World, especially Denizens of the Twisted Earth. The chapter covers all sorts of groups and interesting places – or rumours of interesting places – that might be encountered in the world. If you’re struggling to come up with a feeling of just how Darwin’s World -is- then this is the chapter that’ll put everything in its place for you. On it’s own the chapter seems fairly standard but its one of the reasons that pushes the print edition of the game forward of the first electronic copy (but perhaps not Darwin’s World Complete in PDF) as the one to buy.

The book concludes with a good section of detailed prestige classes. Prestige classes are important in Darwin’s World in that they’re a good and clear way to move your characters from the low levels of trying to survive in the twisted earth to the point where they’re the rulers, heroes and explorers of the planet. I think some of the prestige class abilities sit slightly uncomfortably in a non-magical world. That is to say, the higher level abilities strike me as rather spell-like but I fear that’s a weakness in prestige classes rather than a problem exclusive to Darwin’s World.

I liked the book. Although its softback and black and white – rather rare for a company’s flagship campaign world these days – it feels solid enough in my hands to complement the level of detail inside the covers. I really like the colour art; the front and back pages really are good. The big eyed monster (some sort of horrible mutation) is the critter responsible for staring out at you from various banner adverts across industry sites.

"Where everybody knows your game"
Wyrd Reviews 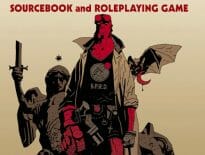