You are here: Home / GameWyrd / Wyrd Reviews / The Slayer’s Guide to Female Gamers 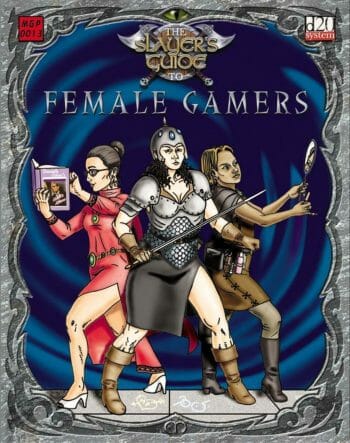 Rarely has there been such a controversial roleplaying supplement. Long before the release of the Slayer’s Guide to Female Gamers there had been much debate on the Mongoose forums and mailing list. It’s a satire, poking fun more at male players than female players but the mere suggestion that something negative might have been published about female players was enough to sally forth a steady stream of men with ready protests. Now having read the book the irony of such a reaction is not lost on me. The reaction from actual female gamers, at least from what I’ve seen, was a more level “Why should I buy this book?”. That’s a harder question to answer. For a laugh? I laughed. To keep your Slayer’s Guide collection complete? As a gift for someone else? Ultimately the rational behind buying a spoof product is a tricky one but I’ve found that the sister book, The Slayer’s Guide to Rules Lawyers is a great thing to hand to a visiting friend to read while we wait for the pizza to be delivered. Strangely enough, this is the sort of behaviour the Slayer’s Guide to Female Gamers predicts for male players. Finally, to address some honest to goodness (if bizarrely naive) concerns I’ve seen expressed in discussions about the book, the Slayer’s Guide doesn’t contain suggestions on the best way to kill off female gamers.

So, what does the thirteenth Slayer’s Guide actually offer? It’s in the same pattern as most of the other Slayer’s Guides and moves swiftly through the introduction, to the historical role of female gamers, female gamer physiology, warfare, roleplaying with female games, the female gamer race, prestige classes and then feminine magic. It’s written by a bloke, the same bloke who wrote the Guide to Rule Lawyers and The Munchkin’s Guide to Power Gaming. The illustrations are all done by men and that surprised me since Mongoose seem to have plenty of female artists on their lists.

I just want to steal a quote from the start of the introduction. I know plenty of female gamers and yet this still seems very true to me.

Straight away in the introduction you’ll notice that the book makes use of humour footnotes. This wasn’t the case in the earlier Rules Lawyer book and I think they’re a great addition.

The historical role of female gamers is a spoofed timeline through the early days of historic enactment wargaming, into the birth of traditional roleplaying as we know it, the period described as the “Witch Hunt” through 1974 and1990, to the female invasion of 1990-2000 when the release of, ahem, Bloodsucker: The Pretense, and then into the current ‘New Century’ and the age of Massively Multiplayer Online Games. You have to laugh at Bloodsucker: The Pretense. You know it’s true.

The physiology section pokes fun at the male tradition of drawing only scantily clad or, at best, chainmail bikini super models in various action poses but how, over time, this has begun to be watered down as more and more women play the game. Again, I’m going to have to quote:

“The Female Gamer appears to have a physiology largely at odds with what you would expect from an extensive study of the readily available tomes of lore. Much shorter than the scholars Achilleoes or Royo would have you believe, and much more covered in opaque clothing.”

The chapter also dares to consider such topics as mating practises (which ends by pointing out that helping games designers up from floor if you find them crumpled over in pain would be much appreciated), the spooky sixth sense by female gamers and the just as scary fuzzy logic. This large chunk of the 32-paged book briefly considers that the pleasant fragrance of the female gamer may be due to plenty of baths and showers but quickly dismisses this idea on the grounds that all gamers known such devices are a sure fire way to catch a cold. We’re told about the “Look” an offensive/defensive ability of no small power, the lumps of fatty tissue described as hypnotic boobs and the strange relationship female gamers have with technology.

The female gamer mindset is a great example of how the book pokes more fun at male characters. According to this tome the female gamer has the strange desire to build up a character personality, relationships, a history with more detail than “My parents were killed by orcs when I was young” and has little interest in finishing off the villain of the week when compared to the chance to explore complex emotions. This does sound like a truly alien concept of roleplaying.

One of the great mysteries behind the female gamer is explained too. The mystery of the toilet is revealed as a gateway into a parallel dimension from where the female gamer can watch the goings on in the real world with impunity.

The short warfare section briefly describes the interesting but dangerous to watch catfight, the important role of gossip and the strange ability many female gamers have which enables them to produce giant comic mallet from no where and bash the largest man into unconscious with a single blow. Thankfully this latter ability has only manifested itself in anime and has yet to cross over to this dimension.

In the roleplaying with female gamers section we’re told how to portray a woman and that there are really only two types; the princess and the wench. Should I point out the spoof warning on the back cover of the book about this Slayer’s Guide containing gender based humour and only being recommended for people not likely to be offended? No? That’s all right then.

The book comes to a close with the stats for the Female Player Race, including the ability adjustments (and a note of near apology to Lara Croft and Susan Ivanova), skills (with the move silent bonus) and powers (The Look, Find the Lost, etc). Thankfully both prestige classes (the Velvet Goldmine and the Ladette) are detailed through ten levels which is good because anything less is a half-arsed effort. Finally, there are two pages of feminine magic, feats and magical items. The pout and cry feats. Magic items that include hot pants and sloganised t-shirt of distraction. Spells include “Break Technology” and the Power Word “Fine”.

I laughed at a number of places in this book. I’ll take the dangerous step of saying that I can think of female gamers who’ll laugh at it (with it) too; although I’m not sure any would go out and buy it. It’s funnier than The Slayer’s Guide to Rules Lawyers because it pokes fun at -everyone- (but mainly men).

The Slayer’s Guide to Female Gamers