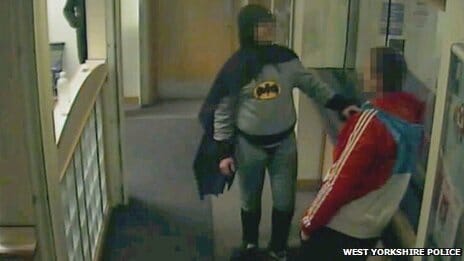 In Bradford, United Kingdom, a man dressed as Batman handed over a suspect to Police at the Trafalgar House Station. The suspect was charged with dealing in stolen goods and on other fraud offences.

“The person who brought the man in was dressed in a full Batman outfit. His identity remains unknown.”

The Badford Batman story comes to us via the BBC and West Yorkshire Police.

Music Team Unicorn and “For the Win”

TV The extended Game of Thrones season 3 trailer
💰 Copper Coins 💰 Geek Native is an affiliate and may earn commission on purchases you make from third-party sites.
🍪 Privacy & Cookies 🍪 The site uses cookies to survive. By accessing the site, you agree to use your browser to control cookie use or take 1d4-3 privacy damage (tracking). If you defeat cookies via ad blocking, please consider the Patreon. An intro to cookies, and how to control them, can be found here. I Manage Cookies