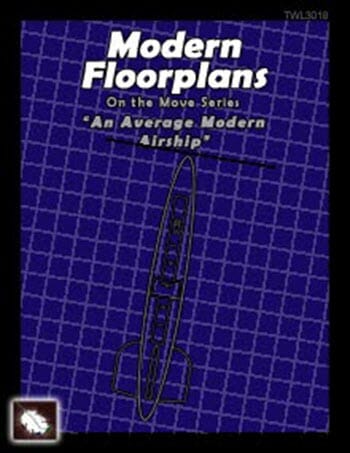 Charles White is the co-founder and director of marketing at Fabled Environments.

Fabled Environments is an Ennie Award nominated cartography studio with a speciality in modern floor plans and diagrams for RPGs. As we find in this interview with Charles, cyberpunk is about as far into the future as Fabled Environments will go. That’s an interesting twist as Charles and co are part of the successful stretch goal of the cyberpunk Kickstarter for Interface Zero 2.0.

Geek Native managed to get some Q&A time with Charles, to ask some direct questions and find out whether professional cartography and accessories were worth the extra cost they brought to RPGs.

You can download free floorplans for a look from DriveThru RPG via Modern Floorplans: An Average Modern Ranger’s Station and Adnap Memorial Gardens.

What makes a good map?

In our opinion, a good map combines form and function in a cohesive package. We believe that a map should be as realistic as possible, yet still be playable. A good map reflects the reality of the structure. A building has to have things like bathrooms, fire exits and things of that nature. The map also has to be visually appealing. Whether it is the design of the footprint or the contents of the structure, it has to appeal to the eye and inspire the imagination.

Why do many gamers appreciate cartography and some even enjoy making maps?

Speaking as both a GM and as a player, what cartography does is gives a visual representation of a space that then provides a tool for a player’s imagination to run wild. A great map literally and figuratively puts the GM and players on the same page and allows the player to be quickly immersed in the scenario/scene/campaign setting. I think that many GMs try to create cartography in order to do just that. The problem is that when it comes to complex design such as cities or structures, most GMs have little experience so that can lead to frustration on both sides of the screen.

Do Fabled Environments exclusively produce maps for RPG companies or do gaming groups and others come to you too?

I really wish we could do maps of structures for gaming groups, but that just isn’t feasible. Every map that we create takes hours and hours of time in research, drawing and layout. We keep the costs of our digital downloads so that individual gamers can take advantage of these products.

We do work with both big and small companies. We have a variety of programs tailored toward Kickstarters and general module/supplement design. I am a gamer and I like working with others in the gaming industry to help them provide a great quality product, such as the guys at Gun Metal Games.

You do have a program that supports GMs at conventions. Can you explain how that works?

Sure. What we do is provide GMs attending conventions or even GMs involved in local events a free digital download of one or two of our maps to use in their game. All we ask is that they provide us with the details of the event, and what they are running. We also ask them to mention that the maps were provided by Fabled Environments and snap some pictures of them in use if they can. We have also been known to provide downloads as prize support to the GMs as well.

You help out with Kickstarter too on projects like Interface Zero 2.0. How can you do a “cyberpunk map”? What should we expect to see?

That is a great question. You have to understand that the broad term for time frame of the cyberpunk genre is near future. While some of the technology has changed, basic structures really haven’t changed all that much. The funny thing about architecture is that you never level a city and rebuild just because the technology has gotten better. You’ll often find homes and commercial structures in most cities that are 30-40 years old, with many more 50+.

Cyberpunk is as far future as we would ever go. Some of this is speculative with regards to design, but typically we are still able to draw on modern examples since we are creating the footprint of the structure and not the cosmetics of the structure, which would change frequently. That being said, we will draw heavily on the expertise of the guys at Gun Metal Games to ensure that the structure has both the realism and flavor that the need for Interface Zero 2.0

What you should expect to see is a clean, playable map that will be versatile that will contain layers that will allow the users to turn on/off certain features on the map so they can have a sem-customizable product.

Professional cartography looks to be incredibly time consuming. Does it add a lot to the cost of products?

It can be very time consuming. Most publishers find that the costs associated with cartography, no matter the genre, enhances the product and makes it much more valuable for consumers. Just like art, cartography adds to the final product.

What about models and accessories? They’re vital for wargaming and miniature games but do you find they can make roleplaying awfully expensive?

I guess that depends on what route you take. One thing that I use in my games is figure flats. These are a great alternative to regular minis for those folks on a budget. One great example is a company called Arion Games. I typically supplement these with plastic or metal minis to represent key bad guys.

Terrain is very similar. There is a ton of great papercraft out there that can be assembled or you have companies like World Works and their Terraclips line that is a hybrid. Also, companies like War Torn Worlds is offering high quality durable painted terrain for a price that makes it affordable for most gamers. I have products from both of these companies and we actually sell War Torn Worlds terrain since it complements the gaming experience so well.

“I always suggest purchasing a map or terrain piece that you can see yourself using over and over again.”

What tips do you have for making the most out of accessories in gaming?

I think it goes back to versatility. I always suggest purchasing a map or terrain piece that you can see yourself using over and over again. A great example of that is a set of crates that I bought 5 years ago. I have used those in adventures ranging from Fantasy to Cyberpunk. If you have some additional funds, then go for the pieces that you might not see yourself using as often, but are a great addition to your collection.

Coming back to the atmosphere challenge with a setting like Interface Zero and cyberpunk do you have any recommendations for futuristic maps and terrain pieces?

That’s a loaded question. :-) Outside of the Fabled Environments line of maps, I would say that folks need to check out Simon Powell and his incredible company, Dramascape. He is an incredible cartographer and artist that has done a ton of really cool futuristic stuff that is appropriate for the cyberpunk genre. I love some of the stuff from War Torn Worlds and I really love some of the stuff I have seen from Demo’s Laser-Cut Designs, especially since they do things like dumpsters and playable buildings. 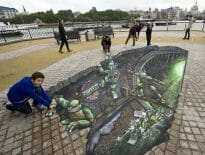 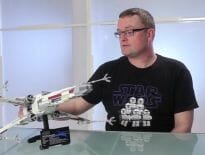