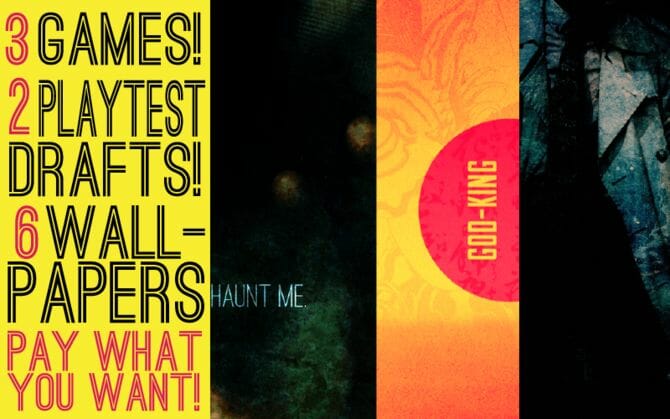 Daniel Chan has created a pay-as-much-as-you-want bundle of RPG goodies. It includes 3 RPG books (God-king, The Legerdemain Betrayers, and Haunt Me), 2 playtest drafts, and 6 wallpapers.

You can grab the bundle here and have until the 2nd of January to do so.

Geek Native reached out to Chan with some questions;

God-king is squarely aimed at those gamers who love telling a good, collaborative story. The game is mainly set on a mythical island with creatures and locations reminiscent of those from ancient Asian tales. Exploring this island may seem like it would be the major focus for the players, but the social dynamics of the group are actually the star here. Each of the adventurers is an integral part of the group – without the Scholar, for example, no one can understand the natives or without the Mystic, everyone will succumb to the dangerous magical effects of the island. The problem is that they have all also come with ulterior motives to accomplish which will eventually lead to a breaking point. With mechanics in play that allow players to both help and hinder each other, the game is an interesting look at how everyone decides to go about finishing their own, personal tasks without risking losing everything.

The Legerdemain Betrayers is about four LA magicians, with actual magic powers, who are sentenced to death. Is this a setting that can be re-used or a custom built adventure?

This one is much more of an open-ended game meant to work in most situations. The deed of the day here is for the players to explore and find out all they can about this crazy, underground world of magic that has been built up all around them without their knowledge. So it can definitely be re-used, whether that’s to continue their adventures or to simply start a fresh, new game with a different perspective. Though players assume the roles of four particular people, there is no pre-set ending or anything of the sort that they have to follow.

How scary is Haunt Me?

It depends on how frightening you find baring your soul to others! Though Haunt Me is set in a haunted house, it is all about escaping that house by telling the others in your group about the secret guilt you have held within you for the longest time. This can be based on something in your real life or entirely fictitious. Haunt Me is not too concerned with popcorn-flick-esque scares. It is a very short, experimental game meant to evoke a storytelling experience that’s a bit different from what gamers are used to. What they take away with them from the session might be the scariest of all.

You don’t sell via DriveThru RPG or RPGNow and now you’re doing this generous bundle. Do you prefer the indie route?

I think it definitely feels a lot better to me. I played a lot of indie games growing up as it was hard for me to afford some of the more popular RPGs like DnD. So I have always had a fondness for the people that put out really great content and create all of this stuff on their own. In that same way, everything about the games in this bundle were done from the ground up by myself. That’s why I really like the idea of continuing on with that by building the site to sell the games on and getting them out there by myself, as well. In this way, I feel a lot more responsible toward how the games are received, however I, too, know that any failures are my own and how to do better the next time around.

End of the End of the World RPG Bundle: 3 games, 2 drafts, 6 wallpapers 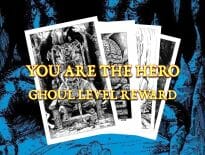 Books A week left to be a hero 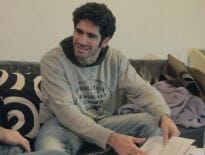