You are here: Home / GameWyrd / Echoes from the Wyrd / RPG Preview: Complete Guide to Wererats | Echoes #5

[Excerpt from the Complete Guide to Wererats] 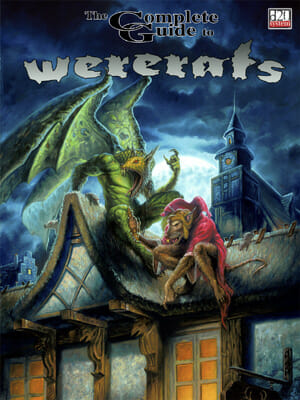 In January, Goodman Games will release the Complete Guide to Wererats. This world-neutral d20 sourcebook covers wererats in exhaustive detail. It approaches wererats as cunning, social creatures – a race of lycanthropes so devious, so cunning, and so insidious that they conquer entire kingdoms without ever being seen. Their secretive broods infiltrate key posts in the government, military, and guilds, ensuring political protection from their enemies. When fighting can’t be avoided, the mystic Council of the Flesh unleashes its horrific cross-bred monsters, which never give a hint as to their wererat origins. When nothing else works, the hard-hearted Weavers spread filth and disease, eliminating entire cities with a single contaminated breath. Kingdoms fall, power changes hands, and the enemies of the wererats are exterminated, without a single outsider ever knowing how.

This preview is from the Campaigns section, which discusses how to use wererats and introduces several wererat varieties.

Wererats can serve many roles in a campaign – the question is how extensive the gamemaster wants their involvement to be. Are the adventurers going to have an extended conflict with a particular brood, or is an encounter going to be a one-time event? Here are a few long-term scenarios involving wererats:

An encounter with a particular creature can be more interesting if the gamemaster gives the monster identifiable personality traits. Ideally players will be able to recognize the type of creature they are dealing with by the way the gamemaster speaks or presents information. When wererats are in human form they should not have any sort of distinguishing behavior. But here are a few ideas for roleplaying wererats in hybrid form.

Aside from these mannerisms, bear in mind that wererats are extremely cunning. In any conversation they will carefully evaluate the situation and the participants. If one of the characters seems uncomfortable or socially inept, they will direct the conversation to that person. They will pay close attention to any sort of interplay between the characters, looking for signs of discord or any information that could be useful in the future. And with their keen lycanthropic eyes and ears, little goes unnoticed in a conversation with wererats.

In diplomatic situations, wererats will always attempt to leave loopholes that can later be exploited or used to invalidate an agreement. A wererat will never agree to a permanently binding arrangement; at the very least he will set a time limit on any deals that he makes. 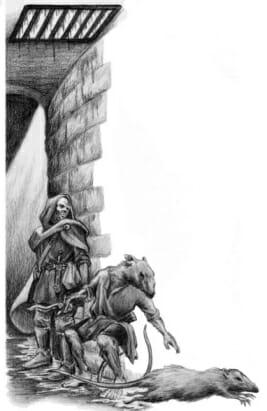 Dealing with a group of Asyra Weavers is a very different experience than fighting a band of Ravers. This section takes a brief look at five of the groups that have been mentioned in this book, providing additional information about the nature of these broods and how this might affect the role they would play in an ongoing campaign.

THE ASYRA BROOD
Masters of Mutation

The progenitor of the Asyra brood was a half-elven wizard named Jessasyra. Her followers call her “the First Weaver” and claim that she pioneered transmutation magic and founded the Council of Flesh to help with her work. Asyra wererats are fanatically dedicated to the continued evolution of their species. They believe that they can attain a higher state – an ultimate merging of man and rat that they do not yet possess. Weavers play a major role in Asyra society. Asyra warrens contain twice the listed number of Weavers; further, due to the eugenic work of the Weavers, all wererat warriors should be replaced by shifters. The Weavers still leave matters of daily administration to other wererats; Asyra leaders are invariably shifters, chosen for the number of shifter traits that they possess. Compared to the other broods, the Asyra possess a large number of elven and half-elven wererats, but humanoid race does not affect status within the brood.

Asyra wererats focus all of their energy on their research. Cities containing Asyra warrens will not be as heavily infiltrated as those occupied by Pindar or Graykin wererats. The Asyra spend more time recruiting sages and infiltrating universities than they do seizing control of guilds or governments. They do what they have to in order to keep their activities hidden from prying eyes, but they have no interest in ruling the world – at least, not until they have completed the work of their ancestor.

The work of the Asyra Weavers focuses on physical mutation. In addition to the high concentration of shifters in Asyra warrens, Asyra wererats are the most likely source for strange beasts like the dragon rat or the Trigat.

Asyra wererats rarely engage in unnecessary vendettas or aggressively expand their territory. Here are a few ideas for Asyra encounters:

THE DORIAN BROOD
The Plague Lords

The progenitor of this brood was a human named Annis Dorian, known to her followers as “The Mistress of the Plague”. The Dorian Weavers claim that it was Annis who created the disease of lycanthropy, grafting the shapeshifting magics of the Council into a viral strain. Members of the Dorian brood scoff at the Asyra wererats and their work with living creatures. The Dorian wererats believe that the key to perfecting the wererat form is to perfect the disease of lycanthropy itself. In the process they study and create mundane diseases, viruses, and plagues of all types. Any major plagues that have occurred in the game world could have been creations of the Dorian rats.

Like the Asyra, the Dorian brood is focused on mystical research. They have little interest in controlling human society and are most likely to target individuals who could help with their research. Dorian warrens will contain twice the usual number of Weavers. However, Dorians have no special regard for shifters; Dorian warrens are typically run by Weavers. Shifters are relatively uncommon in the Dorian brood; those that do exist focus on feats like Plaguebearer and Infectious Bile. Virtually all Dorian wererats have the Filtheater feat.

The Dorian brood is smaller than the other clans, but its use of disease can make it a dangerous foe. Here are a few ideas for stories involving the Dorian brood: 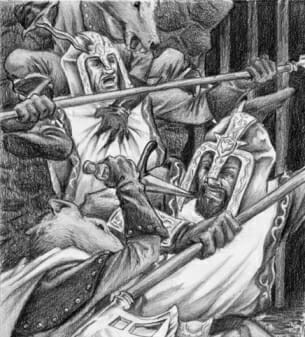 The Graykin are the most cunning members of a cunning species. They are the descendants of Marcus Gray, a master alchemist who served as the chairman of the Council of Flesh. The Graykin have never shared the Asyra’s zeal for evolution. While they dedicate resources to their Weavers, the Graykin are primarily interested in keeping up with the other wererats as opposed to developing genetic innovations of their own. Instead, they focus their energies on gaining control of human civilizations. The Graykin are masters of manipulation, and wherever there is a Graykin warren these wererats will have sunk their claws into government and any other important institutions.

The other side of this is that the Graykin have an almost paranoid fear of direct conflict. They will go to great lengths to hide their involvement in an area, and will always attempt to use humans to do their dirty work for them. Graykin are frequently willing to sacrifice a small operation to prevent the exposure of a larger scheme, even if it means sacrificing lives and resources that they have the ability to save.

Graykin warrens have slightly fewer Weavers than usual. Shifter abilities are respected, but the Graykin place a greater value on natural intelligence and skill. The greatest weapons of the Graykin are connections and wealth; as a result, they are bitter rivals of the Pindar brood. The Pindar wererats focus on mercantile connections where the Graykin place a greater emphasis on political and military power – but the rivalry between the broods is long and deep.

Here are a few ideas for campaigns involving the Graykin:

THE OATH OF FLESH
Destroy All Shifters! 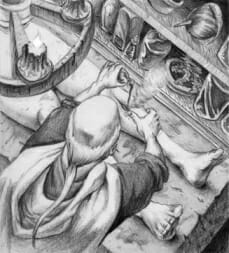 Jordan Torranon, Keeper of the Oath, was the captain of the private army of the Council of Flesh. When traitorous wizards broke their oaths to the Council and stole its research to create other lycanthropes, Torranon swore that he would hunt down all of the traitors and their progeny.

Since then the Oath of Flesh has scoured the world eliminating lycanthropes of all breeds. Members of the Oath are skilled assassins and are fanatically devoted to their task. The Oath has fewer warrens than the other broods; the warrens that exist are training centers for the young and bases for the Oath Weavers. Most of the members of the Oath are constantly traveling, hunting for new prey. Over the centuries, the other broods have come to recognize and respect the single-minded devotion of the Oath; it can be quite useful to have someone show up and eliminate that nest of werewolves. In addition, local warrens will occasionally offer support or research data in exchange for the Oath’s assistance in eliminating a human opponent. As a result, the Oath of Flesh is the only brood that deals with all of the others on a regular basis.

Units of the Oath of Flesh are organized with strict military discipline. The Oath has considerably more racial diversity than the other broods; in addition to dwarves and elves, there are even a few halfling units. A typical unit consists of four to six wererats, including a Weaver, a Ratcaller, and a group of wererats with the physical skills of oathkeepers (see the Complete Guide to Wererats). Most Oath wererats develop the feat Sense the True Form to help identify their prey.

Here are a few ideas for using the Oath of Flesh: 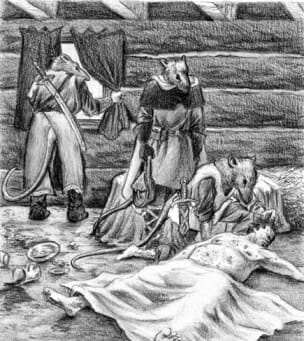 Technically speaking, the Ravers are not a brood. Ravers are humans who have been afflicted with wererat lycanthropy and then left without guidance. The first instinct of a Raver is to infect others; he will feel a panicky need to be around other wererats. Once he has gathered together a group of wererats – typically between five and ten – this urge will subside. At this point, the most charismatic person in the group will seize control; her personality will determine what happens next. These inexperienced wererats may try to accumulate wealth through crime. They may seek to take vengeance on old enemies. Or perhaps they will seek to seize control of a guild or an entire town. The important thing is that Ravers are typically confused and disorganized. They are not in full control of their lycanthropic powers; as afflicted wererats they have to rely on the Control Shape skill to transform. They will not have the backing of Weavers or Ratcallers, and are unlikely to manifest shifter feats. As a result, they are the wererats that are most likely to be encountered by adventurers, and it is their behavior that colors the stories the public hears about wererats. The organized broods despise Ravers, seeing them as trash who threaten to expose their operations; brood rats will eliminate Raver infestations wherever they are found.

Bear in mind that Ravers are still lawful in nature as opposed to chaotic. While they are not as sophisticated as the brood rats and do not have the same level of control over their powers, Ravers are not actually insane and are capable of coordinated actions.

A few ideas for Raver encounters:

For more information on the Complete Guide to Wererats, visit www.goodman-games.com. 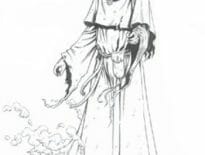