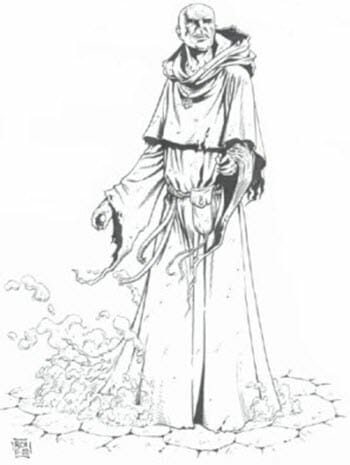 Of all the vampire races, Ash Vampires (known as Corrupters) have the blackest hearts. Forged from the most concentrated source of negative energy, Ash Vampires are a corruption of nature. Their minds are shattered in the transition to undeath, leaving behind a great thirst for malevolence and a twisted delight in psychological torment. They have truly left their humanity behind, and are monstrous and inhuman creations.

Corrupters can destroy just about anything, living or inanimate. Their powers of entropy and decay grow as they age. Their touch is death; they can turn stone, rock and wood to dust in an instant. A brood of Ash Vampires can bring a walled city to its knees. An elder Ash Vampire can cause a hail of ar rows to turn to cinders, and every sword blow rained upon him to crumble to dust.

The presence of an Ash Vampire is always evident to those who know the signs. Around a Corrupter’s lair, the ground will be black and lifeless. Nothing will live in the sky or upon the ground.

Appearance
Ash Vampires have dark or ashen flesh and pale, narrow black eyes. They are either bald or have very fine white or black hair. They exhale wisps of ash and dust when they speak. Their eyes burn like embers, twin points of piercing scarlet.

The Black Kiss
A Corrupter selects his victims carefully, never creating Scion, always true vampires. Rangers and druids are typically chosen. Those transformed are torn between their mortal love for the earth and being forever bar red from it. Their very touch destroys flora and fauna – they have become the very antithesis of all they once valued. This realisation initially leads to a period of personal conflict while the fledgling vampire struggles to deal with who and what they have become. Most newly created vampires are taken to the Ash Plane where they remain until they come to terms with their dark powers. The Ash Plane quickly strips away mortal sentiment, transforming the Corrupter into a dark and emotionless creature in a short space of time.

Society
Ash Vampires have no society. They rarely gather in groups and when they do, do so for business rather than for any social reason. They do not have any particular base of operations in Avystervan, but many gather around the portal to the Ash Plane, where they occasionally stop to exchange secrets or information.

While they are not the most faithful to the Black Council, they are paid very well for any services rendered. Their powers of mass destruction make them an invaluable asset to any brood. Ash Vampires come to Avystervan seeking information, work, or for more nefarious reasons.

There are very few non-evil Ash Vampires. Their good souls are quickly devoured by the Void – and by the very nature of what they have become. Some with considerable effort learn to still the flows of negativity enough to be able to live in relative harmony with the world around them, although these are very few and far between and most are singled out for destruction by the Black Council.

The Black Council have been known to infiltrate Ash Vampires into hard to reach, holy or magically protected locations. They store the inert ashes of a willing Corrupter in a container and transport it through unsuspecting mortal merchants to its destination (see Story and Adventure Hooks p.119). A few days later the Ash Vampire reforms ready to achieve its dark objective.

Outlook
Ash Vampires are the least mortal of all the vampire races. They are considered monsters even by vampire standards. They have no allegiance except to their own, and seek to twist and manipulate those around them. Few are trusted, although they have worked successfully for the Black Council on many occasions without incident.

Corrupters have a very difficult time living in populated areas. At their passing, milk curdles and vegetation withers. Nothing grows in their immediate vicinity. The area of corruption can be as large as several hundred feet in all directions for the most ancient of vampires. Additionally, Ash Vampires drain energy from their surroundings at all times. This manifests as a withering of flesh and a temporary lowering of physical attributes. Mortals in their direct proximity will f eel this effect as a weakness or a strange tightening of the skin. An Ash Vampire is wholly distanced from their mortal heritage and cannot even vaguely pass for human – there is just something too alien and disturbing about them.

Role Role-playing an Ash Vampire
You are a shallow, despicable creature. Undeath has stripped away all mortal sentiment, leaving behind an empty void filled only with darkness. You are considered empty and devoid of emotion even by other vampires, but that simply isn’t true. You take great pleasure in manipulation and the mental torture of others. You love to destroy everything around your victims: friends, family and lovers before feasting on their blood. You revel in causing fear and anguish, pain and suffering wherever you can. It’s all so clear now. What else is there other than the emotional torture of others…?

Alannah stepped closer to the bundle of rags. Wrapped in blankets and dirt, she wasn’t even sure if it was a person at all, or even why she was here. Darke Alley was known for beggars, thieves and worse. It was unsafe after dusk for a group of seasoned adventurers, let alone a solitary cleric armed only with good intentions. Strange creatures preyed on the weak and many who ventured down the sinister alley never returned.

But Alannah had been drawn to Darke Alley as though a force greater than her own will compelled her. Despite the rising gloom, there was something there that she had to see.

“Hello?” She said again, more cautiously this time. The vaguely man-shaped bundle of rags did not move. She looked up and down the ever darkening alley then back again to the rags. She took two cautious steps closer. “Hello. Is anyone there?”

The rags were still and silent.

The last embers of sunlight hung frozen in the timeless moment before dusk.

Quite suddenly the rags shuddered and from within, a blonde haired youth pulled back the thick covers and looked up at her. His face was glorious, smeared with ash and dirt, yet his eyes were large and amber coloured. Surprised at her own fear, Alannah exhaled a sigh of relief, and moved a little closer. What had she expected? A monster, here, in the City?

The youth looked back at her, his features questioning. Had it have been a touch lighter, Alannah would have seen the black tipped feathery wings wrapped around his body. But she did not; she only saw a tired and frightened youth, the pain of a harsh existence marked upon his features.

“Hello there.” She said softly. “I am Alannah, hospitaler of the church of Auraran.”

For a moment, the youth blinked as if woken from a strange and unsettling dream. Then his eyes focussed upon the sunrise holy symbol that hung down around her neck. It gleamed with a gentle incandescence, casting a golden aura across the alley.

“The light.” The youth muttered suddenly, his eyes widening with recognition. He shielded his face with his hand and snarled. “Bright.”

“Sorry my child.” Alannah whispered, instinctively covering her holy symbol with her cloak. Shadow rushed in to swirl around them. Satisfied, the youth lowered his arm, his amber eyes gleaming in the near darkness.

“Can I help you?” Alannah asked gently, moving closer to the rags where the youth lay, “Are you lost?”

The youth thought about the words for a moment, “Yes.” He said slowly, the words sounding strange and unfamiliar. “I am… lost. I need redemption.”

There was such sorrow in his voice, such longing that Alannah quickly came toward him and reached out her hand, “Of course.” She said warmly as the youth rose lithely from his rags and stepped toward her.

She only looked away for a moment; glanced back at the warmth and light of the City. She should never have lowered her guard. All her training, all the words of the wise elders had fallen on deaf ears. Alannah was prepared to risk everything for what she believed to be a soul in need.

And he was in need. Yet it was not for redemption.

That one single moment was all the youth needed. He had broken her neck and sunk his teeth into her throat even before she had fallen to the ground. She was still smiling beatifically, even in death.

When he had drunk his fill, the youth tenderly laid her arms across her chest. He kneeled beside her, resting a slender hand upon her chest, his black tipped wings wrapped around them both.

Suddenly dislodged, Alannah’s holy symbol fell to the ground from underneath her cloak. Its radiance gleamed brightly in the darkness.

The youth snarled as the light flickered around him, and he fell back against the alley wall. He lay there for a long while, staring at the holy symbol as its light faded and Alannah’s body cooled.

Then unable to bear any more, he staggered away, bloody tears of anguish rolling down his cheeks.

Echoes from the Wyrd RPG Preview: Complete Guide to Wererats | Echoes #…
💰 Copper Coins 💰 Geek Native is an affiliate and may earn commission on purchases you make from third-party sites.
🍪 Privacy & Cookies 🍪 The site uses cookies to survive. By accessing the site, you agree to use your browser to control cookie use or take 1d4-3 privacy damage (tracking). If you defeat cookies via ad blocking, please consider the Patreon. An intro to cookies, and how to control them, can be found here. I Manage Cookies