You are here: Home / GameWyrd / Echoes from the Wyrd / RPG News: Talisman to be printed again | Echoes #4

Talisman to be printed again

Reports from Games Workshop indicate that the British games company is planning one last and final run of the widely popular Talisman board game. The initial suggestion is that only the core box set will make this print run as there has been no word on the expansions. The official release date is due to be around April in 2003 and the initial indications on the price are coming in at around $75.

[2002-11-13]
ATLANTA, GA, Nov 13, 2002 – Sword & Sorcery Studios is pleased to announce that it has acquired the rights from Wizards of the Coast, Inc. to publish a new edition of the famous Gamma World sci-fi campaign setting.

Gamma World was one of the very first roleplaying games with a science-fiction setting. It remains popular even today, years after the last edition came out. This fresh new launch, beginning with the Gamma World Player’s Handbook, will keep the high-adventure style while updating the setting concept. The game will be designed for complete compatibility with the popular d20 rules system created and published by Wizards of the Coast, Inc.

Gamma World takes place centuries after the Final Wars destroyed civilization as we know it. The world is overrun by mutants, monsters, still-functioning super-weapons with minds of their own and many other threats. The player-characters must apply their wits, courage and whatever powers and tools they can muster to survive, protect their tribe and begin the long climb back toward civilization.

The new edition of Gamma World completely reinterprets the classic sci-fi setting from the ground up. The elements remaining from the previous concept will have a new spin from a 21st-century perspective, and new ideas play a prominent role in the game’s premise – including details on genetic research, nanotechnology, artificial intelligence and more.

Origins Award-winning game designer Bruce Baugh will develop the new game line. “Gamma World has all the energy and sheer fun of a widescreen action movie, with no limits on the special effects budget,” Baugh said. “The new edition will include elements familiar to fans of the previous version, but it’s designed to work all on its own. The d20 rules provide a great starting point for gamers new to Gamma World – and offer fresh surprises for those who played earlier editions. We’ll cover everything from easy-to-prepare pick-up adventuring to sustained campaigns in which the characters can become the heroic founders of the next civilization. Not to mention other details like dramatic new feats and stunts for cinematic action.”

The Gamma World Player’s Handbook is scheduled for release in the summer of 2003, with additional supplements appearing later in the year.

This report appears in full at Gaming Report.

The End of the World

[2002-11-07]
“Ontario CA – “We’ve only got nine years left,” said Ree Soesbee, speaking by phone from her California home. “People need to know that so that we can be prepared.”

Soesbee is best known for her work on the Legend of the Five Rings and Warlord games for Alderac Entertainment Group as well as several L5R novels for Wizards of the Coast. She is currently employed as a staff writer by Avalanche Press.

“On December 21st, 2012,” Soesbee said, “the Mayan calendar ends. There is no more time. Everything stops. The implications of that are extraordinary, and we need to start preparing for it right now.”

Asked what she thought would be a proper course of action, Soesbee replied, “I think we need to start building starships so that, when the proper time comes, we can travel out into space. There has to be a new home for us out there somewhere.”

“Obviously, this bears close examination,” John Phythyon, Soesbee’s manager at Avalanche Press, commented when informed of Earth’s predicted demise. “When you consider the accuracy and insight that [Ms. Soesbee] has had into other worlds such as Rokugan, one has to believe that she may have similar prescience with our own. We plan to have her develop these ideas more fully so that they can be presented to the public.”

This report appears in full at Gaming Report. 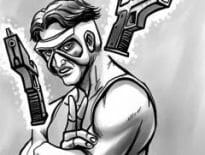