You are here: Home / Books / A review of Spartacus: Morituri 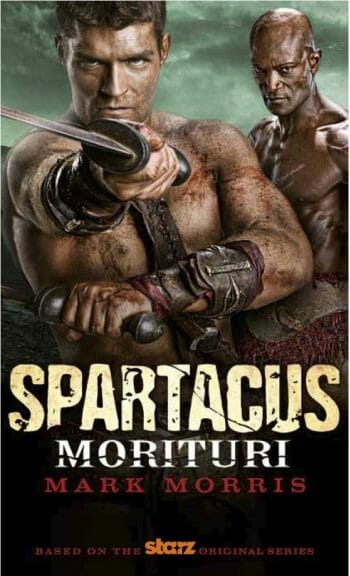 Spartacus: Morituri is a novel that is not just set in the world created by Starz but involves Spartacus and the other gladiators. It is set after Spartacus becomes the Champion of Capua and while Crixus is wounded.

In summary; Morituri is everything you would expect from the Spartacus franchise; violence, sex, politics and human drama all blended together in that Blood and Sand style. If you enjoy the TV series then you’ll enjoy the book.

It’s surprising how well the feel and flavour of the Spartacus series ports over to the written word. There are at least two reasons for this; the first is the almost off-hand and causal approach to violence and sex the TV series takes, this is an approach that is replicable in prose and the second is the actual dialog, with its mild anachronisms, this is certainly reproduced in the book.

All credit to Mark Morris then. As the author he’s the creative mind and talent who has been able to make a book feel like a TV series. He has some history in the area – he is the editor of the award winning Cinema Macabre, a book of fifty horror movie essays by genre thought leaders. He’s clearly studied the visual arts and thought about how to continue them in book. He produced the tie-in novel for Dead Island.

I know Morris, though, as a Doctor Who author and that’s yet another case of the same skill set – taking a TV series with its own personality and bringing it to the page. Morris also has experience in creating from scratch and is the author of Stich, The Immaculate and The Deluge.

Spartacus: Morituri begins as so many of the early Spartacus episodes did – with Batiatus engaged in prestige politics and rivalry. This time things kick off when he is beaten in an auction by a rich Greek called Hieronymus.

How can things escalate from there? It seems like in no time we’ve dealing with ghostly visions and fetish dolls – akin to voodoo dolls, there are plenty of that kind of fetish elsewhere in the Spartacus universe.
Where does it go? The Roman general Marcus Crassus is inspired to found his own gladiator school and Batiatus, of course, finds himself pitching his gladiators against the well-funded newcomers.

The struggle between the competing schools (let’s not forget Solonius’ lot, either) becomes that of bloody attrition. The Ludus has to deal with injury and death while the Roman’s supply of fighters never seems to dwindle.

My sense is that you’ll know whether you’ll like Spartacus: Morituri before you pick it up. If you’ve been tempted by or have watched and enjoy the Spartacus series then you’ll like the book. If the TV show was not to your tastes then there’s little chance the book will give you an alternative offering. In fact, the strength of the book is that it succeeds in being so faithful to the TV series.

Competition: Reading this review before October 12th, 2012? You could win a box set copy of the second season of Spartacus: Vengeance!

My copy of Spartacus: Morituri was provided for review.

A review of Spartacus: Morituri