You are here: Home / TV / Can the Doctor save Oswin Oswald? The Who paradox [spoilers] 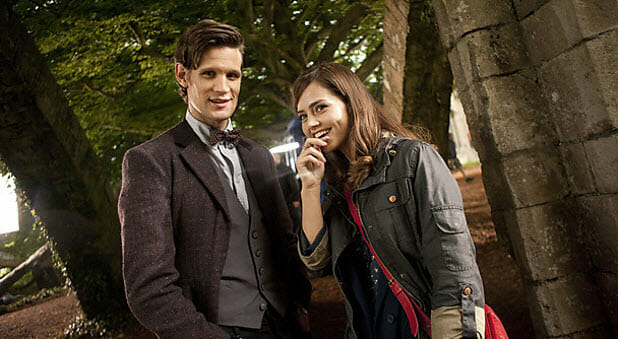 This post discusses the big surprise in Asylum of the Daleks, which is the first episode in the new season (7) of Doctor Who.

If you’ve not seen the episode yet and are allergic to spoilers then this post of a Predator hunting Na’vi on Pandora should distract you away from this post, click on the link and flee.

Jenna-Louise Coleman will play the next Companion in Doctor Who and we’d previously been told that would start at Christmas. It had previously been reported (and denied) that she would be called Clara Oswin and her first line was going to be; “Rescue me boy and show me the stars”. The same report said she would be a computer genius.

In Asylum of the Daleks Jenna-Louise Coleman plays Oswin Oswald, a computer genius. She also needs to be rescued. She uses a very similar line; just add “chin boy”.

The assumption is that the Oswin in Asylum of the Daleks is the same Oswin that becomes a Companion and rides in the Tardis.

What do you think? Think that’s right?

It’s Oswin who is responsible for hacking the pathweb and making the Daleks forget about the Doctor. If her transformation is not a fixed point in time does that mean the Doctor can go back to save her?

If the Doctor goes back to save Oswin then does that mean no one is able to reprogram the Daleks and make them forget about the Doctor? Here’s a paradox. If he rescues Oswin, she doesn’t transform, doesn’t upset the Daleks, then Daleks won’t kidnap the Predator and the Doctor will never meet her. At least; he won’t be pre-warned that she needs saving.

There’s another important point too – there were seconds between the shield dropping and the prison planet exploding. The Doctor could have popped back in that time for an Oswin rescue. If Oswin was capable of teleporting or even time travel – which Daleks are – she may have rescued herself.

What would post-Asylum of the Daleks and rescued Oswin be like? There’s an outside chance that the teaser pictures we’ve seen of Oswin are of the Doctor and a projection. There’s a terribly small chance that the next Companion is a Dalek. A Dalek that uses a projection system (Rimmer from Red Dwarf? The Doctor from Star Trek?) to explore beyond the TARDIS.

I think a pre-Asylum of the Daleks Oswin is a more likely companion, though, and that means messing with the timeline that we’ve seen.

Messing with the timeline, saving someone who appears to die but actually doesn’t is a very similar plot line to season 6, River Song and the Silence. There’s also an echo to when the 10th Doctor met River Song. The first time he met her she, effectively died, being tied into the machine.

What do you think? Is this speculation way off? Was this the Companion? Will she be saved? Or is this a River Song-esq “first time is the last time” style introduction?

Great article,
My guess is that after loosing the Ponds, he remembers his promis to never forget Oswin, and travels back to save her, some Moffet timey-wimey stuff happens and she becomes clara oswin

Ooh. Good theory – so you’re not just dismissing the name Clara Oswin as slightly off info/leak?

The name ‘Clara Oswin’ is not even confirmed. I don’t know where this came from. But there is a chance it could be a relative because pictures of filming the Christmas special, she is whereing an old fanished dress from the past (like victorian or tudors).

It’s possible that “Oswin Oswald” won’t be the next companion – I suppose. That would explain the Clara name but I think it would be odd to re-introduce JLC as a brand new character.

Fascinating character.
If the doctor was to save Oswin. Even
has a Dalek. He could use the ‘skin’ duplication tech in a similar manager to
how it was used to allow the pregnant Amy to travel. Store Oswin Dalek on the
TARDIS and allow her to control a “skin” from there.

One note of caution however. The Asylum planet
was for insane Daleks Does Oswin’s mental issues only extend to her creation of
the mind plaice or could other problems arise.
Eggsterminate indeed

I like this a lot! I really think that tying in these two main hypotheses is one very logical way of doing so! But I think that a series of “Oswalds” would be more likely rather than saving Oswin or running into some sort of ancestor or offspring

See… Oswin is a bit tricky, she’s smart enough that the Daleks choose to steal her. What if Oswin Oswald isn’t the ONLY Oswin? What if there’s a few of them? That would intrigue the Doctor somewhat wouldn’t it?

That’s a good point – I popped that suggestion into the latest Oswin post
http://www.geeknative.com/31768/is-oswin-oswald-really-the-doctors-next-companion/

A race of Oswalds? Like.. maybe they’re genetically enhanced for specific purposes or something more insane… and sinister!

Does having a whole race of Oswalds detract from having just one as a companion or even from Oswin Oswald’s dramatic fate?

My bet is that the new Clara Oswin is just someoen who looks like Oswin Oswald; both Any and Martha appeared as other characters in earlier episodes/series so perhaps it’s just a teaser? Or perhaps he will de-dalek-ise her

Yeah… but Oswin Oswald was a huge role whereas Amy and Martha had bit parts. It’s a mystery!

Well I’m going to guess Oswin Oswald travels with the doctor, he hasn’t ever seen her so he doesn’t know what she looks like.

They travel together and he realises, and tries to prevent it with timey-wimey stuff, but she makes the decision to sacrifice herself and loses her memory in the process, and that’s how she’ll eventually be written out.

Amy started to turn into a dalek but when they left and the planet was destroyed the damage was reversed. What if the Doctor pops in after he talked to Oswin and before the planet is destroyed and saves her. Then because she is away from that planet, she changes back to human. No need for a Clara.

Or what if the Doctor runs into Oswin’s daughter Clara on Earth? Oswin could have had a daughter before she left on the starship alaska and then JLC could play Clara?

I surmise that his new companion is in fact a dalek inside a teselector skin to look human. The Daleks want to know who the strange man is that was in the asylum, so what better spy to use, than a dalek that thinks it’s still human to pose as his companion.

I like this, but she found out at the end that she was a dalek, so this has some continuity issues. Not that Doctor Who is immune to those or anything… >_>
lol

Can the Doctor save Oswin Oswald? The Who paradox [spoilers]

TV Doctor Who: The best of the Oswin Oswald fan art o…
wpDiscuz