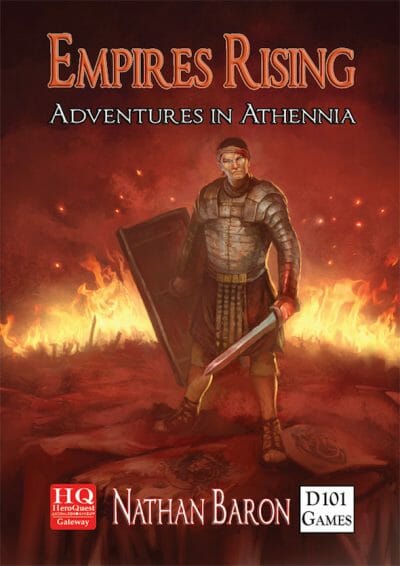 Empires Rising is a game of empire building, conquest, war and adventure by Nathan Baron. The cover art is by Jon Hodgson. The book is 104-pages of history, politics, a full city, reglions, character races and occupations as well as a bestiary and four complete adventures.

The setting is called Athennia. Two powerful forces are making significant moves to grab territory. There’s the Grydornlan Empire, a totalitarian power that uses religion as its reason to invade smaller neighbours. There’s the naval power Atalansia which D101 describe “sails the seas liberating nations from the yoke of tyranny”. Stuck in the middle of all this is the ALliance; a group of smaller nations that have banded together in hope of surviving the Grydornlan Atalansia clash everyone suspects.

It is a fantasy setting with battle magic, divine magic and sorcery. The four scenarios included in Empires Rising are: The King Thief, Curse of the Necromancer, Pirates of the Black Isles and Winter’s Song. They are designed to introduce the setting.

The softback is available for sale via Lulu.com. It’s also available, for about half the price, as a PDF from DriveThru RPG.