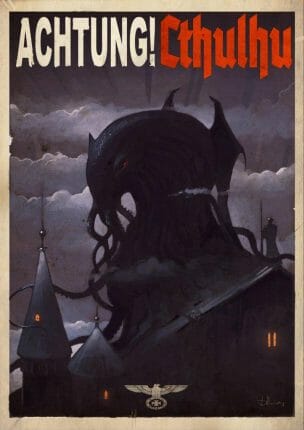 Chris Birch’s London imprint for RPGs MODIPHIUS has signed a deal with Chaosium to bring the Achtung! Cthulhu campaign series to Call of Cthulhu. The Achtung! Cthulhu setting, which Geek Native wrote about first in March, is Cthulhu among the horror of the Second World War.

Zero Point is a globe-spanning campaign, written by Sarah Newton (Legends of Anglerre, Mindjammer), layout by Michal Cross and with artwork by Dim Martin. The first book, Three Kings, is 44 pages and is the first part in a multi-part collection for Zero Point. It’s expected that Zero Point will be the first of three separate campaigns for the Achtung! Cthulhu series. Each episodic release will be completely stand alone, designed to allow the setting material to be used as one off or with the rest of the series.

In Three Kings players find themselves dealing with a band of heroic soldiers, intelligence agents and resistance fighters as they discover untold horrors in occupied Czechoslovakia.

Music The Evolution of PC Games: the musical