You are here: Home / Games / Tabletop & RPGs / Interview with Chris Birch of Achtung! Cthulhu and Modiphius

Chris Birch is the writer and game designer of the FATE based Starblazer Adventures space opera RPG published by Cubicle 7. He is the creative director at Joystick Junkies and runs the publishing imprint Modiphius. 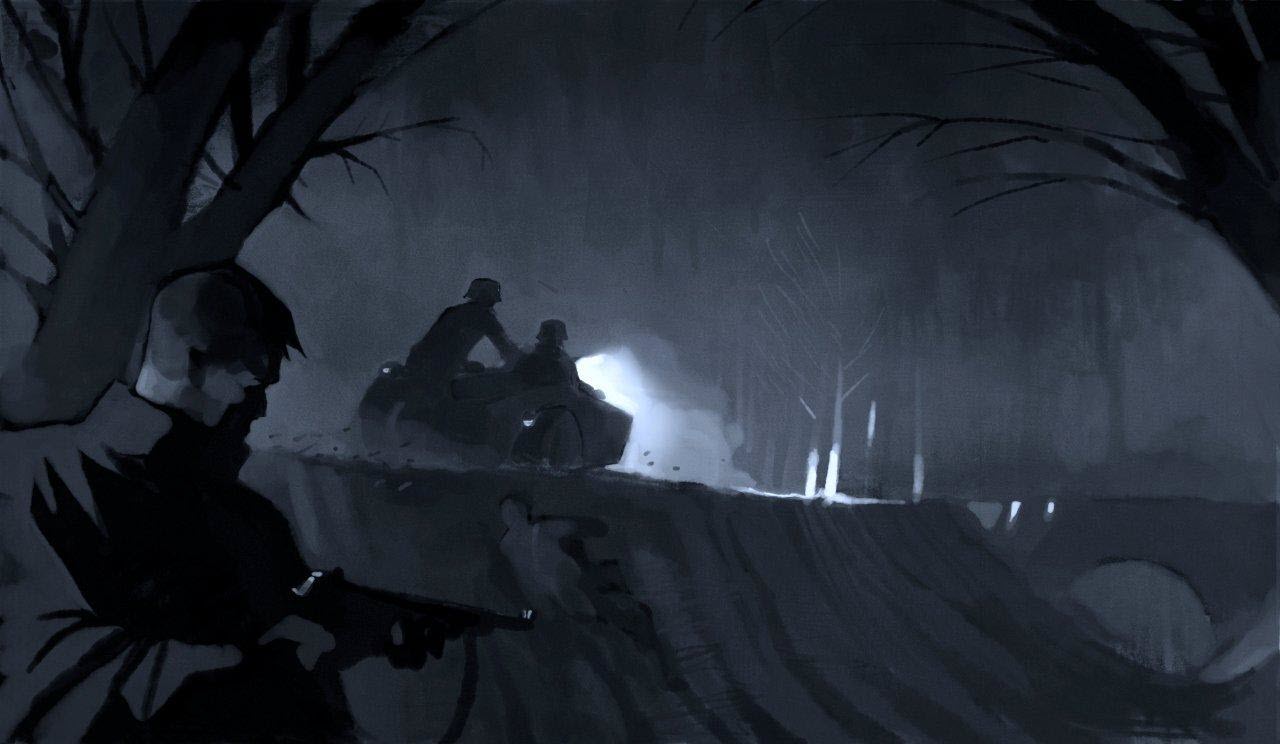 Q. Can you give us the elevator pitch for Acthung! Cthulhu? In the time it takes for an elevator to lift off from the ground floor of a decrepit London high-rise and reach a 13th floor that does not appear on any blueprints can you outline why gamers will be interested?

It’s WW2 with Tentacles… wow that was one quick elevator! Okay it always slows down just before the 13th floor so let’s try again… Fanatical scientists, desperate partisans, grim commandoes, and more are all at the front line of an explosion of dark mythos events across the war torn 1940’s world. If you like your pulp dirty, dark and desperate and your Cthulhu on a scale you never imagined then Achtung! Cthulhu is for you

Q. Where did the inspiration for Achtung Cthulhu come from?

I’ve been a fan of the Weird War & Sergeant Rock comics since I was a kid, and I have been a WW2 wargamer since I could figure out how to roll dice to see which little plastic soldiers died. A couple of years back I bounced some ideas around with Sarah Newton about a Fate based WW2 project and imagined how fun Flames of War would be with fiendish scientists and Nazi zombies… so when Sarah came to me with the Zero Point campaign I knew it was a sure fire winner. Things quickly grew from there!

Q. You’ve got some recognisable names working on the project with you. Can you tell us a little bit about these artists and authors and what they are contributing?

Sarah Newton is writing the Zero Point campaign of which Three Kings is episode 1, yet still a stand alone story you can drop in to any campaign. She’s got a whole series of adventures to come. Her recent Mindjammer novel has really established her as a name in the sci-fi scene so it’s great to have her on board. Dim Martin is penning the excellent comic book style artwork that makes the books rock and he really understood the foreboding style we wanted across the board. Finally Michal Cross is responsible for our lovely maps and the whole souped up wartime feel of the books. Beyond Zero Point we have a whole host of writers and artists working on different campaigns and supplements which we’ll be announcing next.

Q. Achtung Cthulhu is available for different RPG systems. What was the motivation behind that? What does each of the systems bring to the game?

We’re also working on a Trail of Cthulhu version next which probably rounds off the different types of players. I wanted to make sure the largest number of people could access the world of Achtung! Cthulhu without having to learn a new system. Adding another system is not a huge amount of work if we feel there’s enough people playing it to justify the work.

Q. Can you help clear up the relationship between Achtung Cthulhu, Zero Point and Three Kings? How many books do you need to purchase before you have one complete set for any given system?

Achtung! Cthulhu is the brand – it’s the overall concept for our world of terrifying tentacle fuelled wartime encounters – we’ll be releasing RPG’s, novels, t-shirts, collectibles and even boardgames under this name. As part of the RPG products we are releasing several campaign settings. One of these campaigns is Zero Point a series of adventures from Sarah Newton (we’re expecting 6-8 parts). Three Kings is part 1 of that, yet a standalone adventure with all the rules you could need. As you purchase each episode you’ll be getting more and more new rules and setting information to help you expand on our vision of WW2. Buyers get nice discounts on subsequent adventures and future print runs as thanks for their support of the PDF’s.

We’re about to release Part 2 of Zero Point and another of the campaigns is also due to start being released soon.

Q. How has working on Achtung Cthulhu differed from your Starblazer Adventures and Legends of Anglerre experiences?

Starblazer Adventures and even Legends of Anglerre were epic projects, hundreds of pages, weeks, months of work and long distant release schedules. With Achtung! Cthulhu I wanted to chop things up so we could get stand alone, good quality products out to fans, to get people playing in our world and joining the action. There’s nothing more inspiring to writing than seeing your products selling and it’s had a fantastic effect on the team (which is why we’re close to releasing another bunch of products!

I’m also releasing Achtung! Cthulhu under my Modiphius imprint, so I’ve been playing the role of publisher, editor, art director and more. I’m writing on one of the campaigns which is great but I’ve also been bringing a larger writing team together on this and a sci-fi setting we’re about to announce which is tied in with a Facebook game launching next year. Being in control of what we do, when we do, how we do it is so much more satisfying but extremely hard work.

Q. What do you think GMs need to do in order to give their players the best possible Achtung! Cthulhu experience?

Call of Cthulhu can be deadly, now throw in the harsh realities of WW2 and you have a cocktail of danger that is enough to finish off most characters. Don’t be afraid to bring that home under a barrage of machine gun fire, but I’ve read Lovecraft as being full of opportunities for daring madmen. Don’t penalise players for being true grit, for running when they should duck, for being the man or woman of the moment. Just try not to giggle when they’re being dragged off by those tentacles. There’s SO much material for WW2 to inspire your adventures, just follow some links on Youtube and you will find immense amounts of source material to get you going.

“I actually do encourage people to learn more about this period – we’re trying to highlight some of the real heroes that fought and died.”

Q. What do you think an Achtung! Cthulhu player do in order to contribute to the experience and enjoyment of the gaming group?

Help the group get in the Wartime spirit, get a sense of the area of the world you’re in, read a little of what was going on then to help contribute to discussions. You’re not in danger of knowing too much, there’s a much darker menace brewing under the storm clouds of Europe but an awareness of some of the greatest events in our modern time can only help. I actually do encourage people to learn more about this period – we’re trying to highlight some of the real heroes that fought and died.

Q. What’s been the reaction to Achtung! Cthulhu so far?

Really amazing so far, we put a lot of effort in to this first release and we intend to keep the same level of quality up. It’s so exciting to hear about people playing it and wanting more!

Q. Finally, which writers, artists and game designers would you recommend that Geek Native’s readers go check out? Who’s producing gaming goodies that you recommend?

I love Pinnacle Entertainment’s product – Deadland’s Noir is going to be amazing and Hell on Earth Reloaded looks beautiful, I love what the Precis Intermedia guys are doing with the Genre Division rules, Greg Stolze (Reign) always surprises, and seriously read Mindjammer by Sarah Newton I had to finish it in a weekend….

Interview with Chris Birch of Achtung! Cthulhu and Modiphius