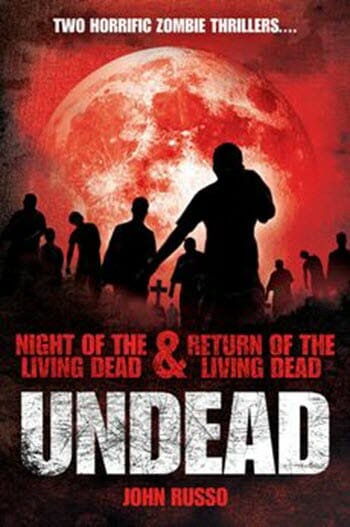 Zombies! This book has ‘em. Chances are this is all the information you need to determine whether or not you should give Undead a read. If not, perhaps because you are connoisseur of only the best zombie tales, please do read on.

You will be interested to know, my dear zombie connoisseur, that Undead has pedigree. It is written by John A. Russo, who co-wrote George A. Romero’s genre defining film Night of the Living Dead. Indeed the first of two stories in Undead is the novelisation of its screenplay. On the other hand the second story, while having the name Return of the Living Dead, is a significant departure from the film that shares its name. I will avoid telling you the specifics of this departure as nobody likes a spoiler.

On the subject of spoilers, if you only read a book to find out what happens next in a story, and you’ve seen Night of the Living Dead, this is obviously a problem. But I would recommend against this instinct because the first tale in Undead is expertly told, and represents a fine example of how to tell a good horror story, be it zombie based or otherwise. Events in the tale fire along at a snappy pace, but without hurting the continual accumulation of dread that is necessary for the horror of the situation to get its hooks into you. Just how well this balance is maintained is emphasised by the relative failure of the second tale to do the same. I say ‘relative’, because while Return of the Living Dead is certainly worth reading if you like your zombie fiction, it is simply outclassed by its unliving predecessor.

The reason why Night reads better than Return is the same reason why the first Die Hard film remains the best in that franchise. By keeping the events in the narrative focused on a specific location, and by avoiding large leaps in the passage of time, the story better maintains a sense of unity to its drama. In Night of the Living Dead you get to feel the panic, the tension, the confusion and the exhaustion of the characters in the face of an unprecedented (in the lore of its world) zombie outbreak. Return of the Living Dead sacrifices some of this unity in order to take a wider look at how society at large responds in the face of a second outbreak. (Okay minor spoiler, society gets a bit messed up. Also, guns are involved).

Zombie tales are very fashionable, which is another way of saying you’re probably oversaturated with them. Despite this I would still recommend giving Undead a read as Night of the Living Dead is simply one of the best. Return of the Living Dead is decent, but you can skip it without too much harm.

PC DDO: Werewolf dungeons and dryads
💰 Copper Coins 💰 Geek Native is an affiliate and may earn commission on purchases you make from third-party sites.
🍪 Privacy & Cookies 🍪 The site uses cookies to survive. By accessing the site, you agree to use your browser to control cookie use or take 1d4-3 privacy damage (tracking). If you defeat cookies via ad blocking, please consider the Patreon. An intro to cookies, and how to control them, can be found here. I Manage Cookies