Amazingly the post is a look inside – take a breah – the Borderlands 2 Deluxe Vault Hunter’s Collector’s Edition and Ultimate Loot Chest Limited Edition.

At this point I can’t even tell you whether that’s 2K Games’ Borderland humour or whether “Borderlands 2 Deluxe Vault Hunter’s Collector’s Edition and Ultimate Loot Chest Limited Edition” is marketing speak gone mad. Just how important are collectors editions to the “please, please, pre-order and pay a lot” market that keeps computer games profitable?

These are two different editions. 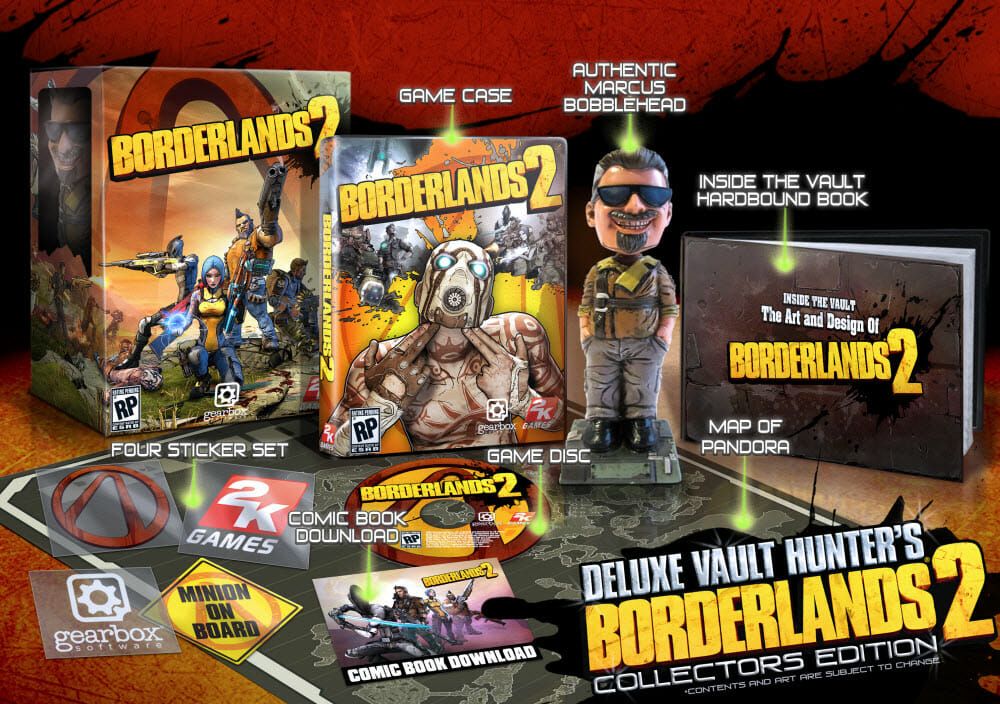 Inside the Deluxe Vault Hunter’s Collector’s Edition is a Marcus Kincaid bobblehead, an Inside the Valut: The Art & Design of Borderlands 2 hardback, collectable stickers, a map of Pandora, a code for a digital comic download and bonus, downloadable, in-game content. 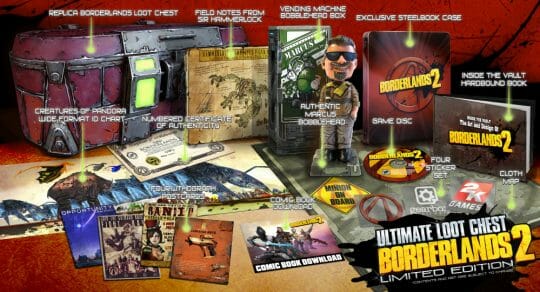 Inside the even more expensive edition, the Ultimate Loot Chest Limited Edition, is everything listed before and a collectable scaled replica of the red loot chests, a steelbook case, Creatures of Pandora wide-format ID chart, a lithograph postcard set, field notes from Sir Hammerlock, a cloth map of Pandora and a certificate of Authenticty.

There’s more! If you pre-order either of these editions or even the standard edition of Borderlands 2 then you get access to the Borderlands 2 Premiere Club. That means you’ll get access to the Gearbox Gun Pack, a Golden Key, the Vault Hunter’s Relic as well as the Mechromancer. The Mechromancer is the new fifth class being introduced by the game and people who don’t pre-order may well feel annoyed it’s not available to them.

Borderlands 2 is due out in the States on the 18th of September and a few days later, on the 21st, everywhere else.

Of course, these pack trailers are giving us clues to the game. Who is Sir Hammerlock?

I liked the first borderlands (or Fallout with color as my group of friends likes to refer to it) but after ME3 I’m not preordering games ever again.

Lots of drama around the ME3 preorder… what did you feel let you down? Wasn’t the only way to get the Prothean?

The Prothean was alright, but I just never used him. Aria was better biotic support and 90% of the time I was running with the crew that stuck by my side through both previous games anyway (Garrus and Tali.) The best part of From Ashes was the Prothean rifle. In the end the ME3 collectors charged $20 extra for a stripped down art book, an iron on patch and a virtual hoodie. It also comes from my ultimate disappointment with the game itself. I decided that ME3 was the last game I was ever going to buy sight unseen. It’s… Read more »