You are here: Home / TV / Watch a clip from the missing Doctor Who episodes

The BBC does not have all the Doctor Who episodes ever recorded. The series is so old it dates back to a time when video tape was very expensive and the BBC actually deleted some of the old espidoes in order to re-use the tapes.

Good news. Two more episodes, once believed to be missing, have been found in a private collection of a former TV engineer. He actually bought them in a school fete in the 80s.

Airlock is the third episode is a story called Galaxy Four. It was originally transmitted in 1965 as part of a four part collection. The story dealt with a race of female clones trying to escape a planet before it explodes. In it Hartnell teams up with the Blue Peter presenter Peter Purves and the novelist Maureen O’Brien.

The second episode stars Patrick Troughton as a new Doctor. Called The Underwater Menance it deals with a mad scientist trying to restore Atlantis by draining the oceans of the earth. It was filmed in 1967.

Can you watch any of these missing episodes online? The good news is that the BBC have put a very small snippet online along with news of the discovery. Although the clip isn’t embeddable you should be able to watch it outside the UK.

Watch a clip from the missing Doctor Who episodes 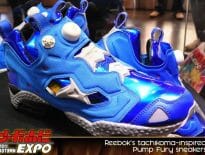