Frank Miller – yeah, that Frank Miller; 300, Sin City, er, Holy Terror – has launched an all out assult on the Occupy movement.

Sure, there’s a lot of criticism that could be aimed at the movement – such as a lack of clarity around its goals, a lack of accountability in its structure or even the fact that it was started by a group called Adbusters Media who use the word ‘pranksters’ to describe themselves. There’s that.

Here’s some of the quotes from Miller’s diatribe. Do you agree with them. Emphasis is mine.

“Occupy” is nothing but a pack of louts, thieves, and rapists, an unruly mob, fed by Woodstock-era nostalgia and putrid false righteousness.

Are they really rapists, Frank? All of them?

In the name of decency, go home to your parents, you losers. Go back to your mommas’ basements and play with your Lords Of Warcraft.

Slagging off gamers, eh? Is that wise. Aren’t we the hand that feeds you, Frank. Are gamers rapists and thieves too?

Clearly Frank isn’t happy with the Occupy movement – certainly not with the American origin of it. There seems to be no comment on the global protests they’ve spawned. Frank seems to think that because America is at war against a “ruthless enemy” that no one should protest like this; they should join the army.

He’s welcome to his opinions, of course. His blog, like Geek Native, uses Disqus for comments and some 558 people have used the system to show their support for his post. The top reply, though, from Daniel Calvisi rips back into Miller and has well over 1,000 votes of support. 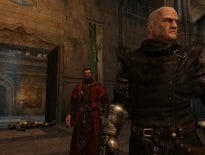