You are here: Home / TV / Terminator’s Lena Headey to play Cersei Lannister in a Game of Thrones 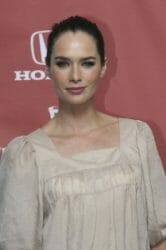 Sarah Conner actress Lena Headey has landed the prized role of Cersei Lannister in the forthcoming adaptation of Game of Thrones.

Hat tip to SciFi-Wire for the news and their better picture of Lena.

Tabletop & RPGs Risen: The Guide to Resurrected Characters
Movies Astro Boy trailer ( HD)
💰 Copper Coins 💰 Geek Native is an affiliate and may earn commission on purchases you make from third-party sites.
🍪 Privacy & Cookies 🍪 The site uses cookies to survive. By accessing the site, you agree to use your browser to control cookie use or take 1d4-3 privacy damage (tracking). If you defeat cookies via ad blocking, please consider the Patreon. An intro to cookies, and how to control them, can be found here. I Manage Cookies