You are here: Home / TV / Doctor Who – huge spoilers for episode 13

If you’re worried about the risk of spoilers then stop reading this. Go back here and read something else. This post is just speculation but it reaches towards sources with better and more official connections in the search for insight and solutions to the “I can’t cope with the suspense” problem.

The 13th episode of series 6 is due to air around 8th October 2011. It’s after the mid-season break. If you want a preview of what’s coming in “A Good Man Goes to War” then this prequel vid from the BBC is already out. This post looks even further to the future.

Last warning; if you want to avoid spoilers – turn away now.

The cast list at IMBD reveals which actors will be in the episode and who they will be playing.

If IMDB is accurate – and it may not be – then this will be a multi-Doctor episode. That’s happened before but it’ll be a first for New Who. 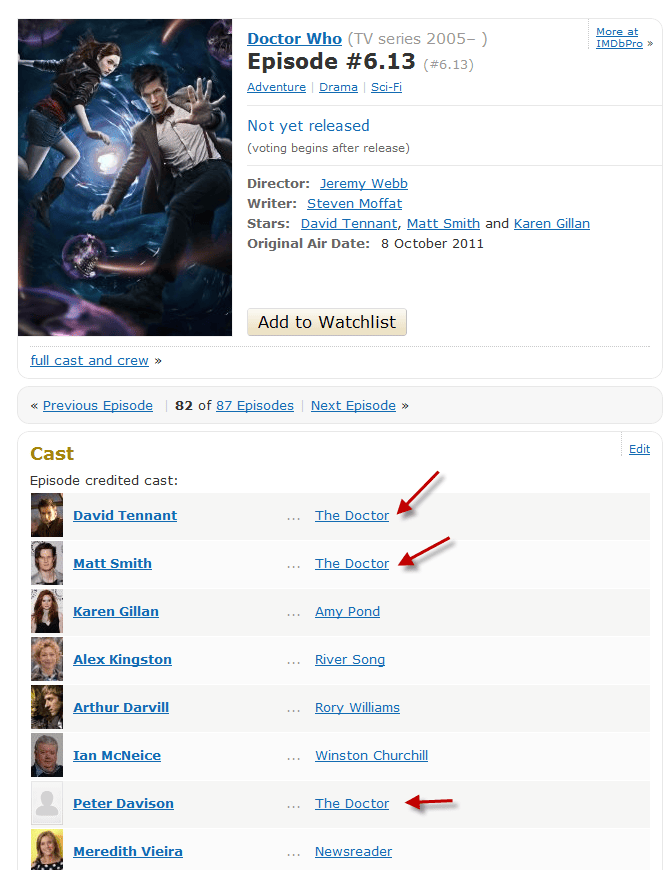 There are more twists. David Tennant is engaged (did they get married?) to Georgia Moffett. She played his on-screen “daughter” in the Doctor Who episode Time Crash. She’s also Peter Davison’s real-life daughter. That’s right, the Doctor is engaged to his daughter.

What do you think? Is the episode spoiled for you? Do you regret that you read on? Do you think IMDB has been trolled and is wrong?

Doctor Who – huge spoilers for episode 13

time to read: 1 min
Interviews Connor Anderson Interview: Why did he roll a D6?…

Art Fantastic and slightly creepy origami Nazgul
💰 Copper Coins 💰 Geek Native is an affiliate and may earn commission on purchases you make from third-party sites.
🍪 Privacy & Cookies 🍪 The site uses cookies to survive. By accessing the site, you agree to use your browser to control cookie use or take 1d4-3 privacy damage (tracking). If you defeat cookies via ad blocking, please consider the Patreon. An intro to cookies, and how to control them, can be found here. I Manage Cookies