You are here: Home / Geek Stuff / Interviews / Connor Anderson Interview: Why did he roll a D6?

“Roll a D6” is a fantastic music video that’s going great guns on YouTube. It’s a spoof of Far East Movement’s Like a G6 and I’ve noticed a fair few bloggers suggest it is far better. The video was put together by Connor Anderson and his team – Broken Record Films – and Connor kindly agreed to find time for a Geek Native interview.

Okay, see that first paragraph – that was written some time ago. This blogger/interviewer planned to catch Connor and Broken Records as they became famous. A dose of glandular fever later, this blogger back online and ready to pester Connor and co with questions – but it may be too late. “Roll a D6” has had more than 600,000 plays on the first YouTube upload. It’s hugely popular.

Q1. Are you surprised by the video’s success? Do you feel famous?

Yeah, I am incredibly surprised with the success of this video. I had no idea it would end up being so well received. I figured we’d get a couple hundred views and that would be it. But no, I wouldn’t say I feel famous. I wouldn’t even say I feel YouTube famous.

Q2. Where did the inspiration to the parody come from? Was it just as a result of listening to Far East Movement’s Like a G6 or was there another factor?

The main inspiration for this came while playing D&D actually. My friend Zac (The DM in the video) told me to roll a D6 for some in game problem, and the tune just popped into my head. I told him about the idea of writing a spoof song and we wrote it that night over about three hours.

Q3. How much time, money and effort went into producing the video? It looks like a Herculean effort.

From the point of conception to the point of release the total time was about four weeks. Two of those were planning and recording the song, as well as making all the props, makeup, and costumes. We shot the entire film in one day, and the second two weeks I spent doing the editing and visual effects in the thing. Money wise, I’m not exactly sure of the total, but somewhere around $500 I think. Overall, I’m glad it looks as decent as it does.

Q4. Are there are any plans for a follow up? Do you feel any pressure?

Well, we have joked around with the possibility to a “sequel” to the D6 short, but honestly I don’t think that’ll ever really happen. We’ve already moved on to other projects, and in fact I’ve already forgotten most of the words to the song. As far as pressure goes, I don’t really feel any. I mean, I’m going to keep making movies whether or not people on YouTube like them, so it doesn’t really matter to me how they are received, so I don’t feel pressure to make a big hit every time.

Q5. Are you or any of Broken Record Films gamers? If not – what’s your perception on the hobby? If so – which games do you play?

Most of us are gamers, or at least part time gamers. I’m mostly a video game enthusiast, specializing in Left 4 Dead, Portal and anything with “Total War” in the name. I play D&D from time to time, but Zac is the real D&D nerd of the group.

Q6. Your YouTube channel, before “Roll a D6” mentions Mirror Effect from time to time – with a fair amount of teasing your audience about the project. Can you tell Geek Native and readers any more about it?

Ah, yes. The Mirror Effect. Its is a full length steampunk action adventure film. We’re still in the writing and pre production process, so it may be a while before we actually film, but its going to happen soon.

Q7. How much of your time goes into Broken Record Films? Are there big plans?

98.5% of my time is dedicated to Broken Record Films. And we do in fact have big plans. We’re currently in the middle of filming a six part action series, and I know we have a western and some other shorts lined up as well. It’s going to be a busy summer.

Q8. It seems like fan made videos – whether for music, trailers or even mini-movies – seem to get better and more impressive with each passing month. Do you think we’ll see a time when tiny production companies will be able to challenge the current, well funded, TV and movie production firms?

Yes and no. Eventually, consumers will be able to buy really high quality gear for tiny amounts of money and make really high quality work with it. But I think that for a lot of people there will always be a magic to Hollywood, and I think it will take a long time and work for that to fade out. So yes, I suppose in a sense that the quality may become similar, but no because it will always be difficult for an independent filmmaker to compete with studio backed super productions.

Q9. I have the email address of Matt – one of the dancing orcs in the Roll a D6 video. I think he knows you quite well. If I asked him to give me three words to describe you which words do you think he’ll pick?

Either “Not That Tall” or “Needs To Shave”? I really have no idea.

Connor Anderson Interview: Why did he roll a D6?

time to read: 4 min
Console I want Location Based Gaming to be Project Cafe’… 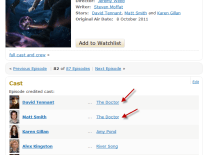