Wizards of the Coast have shared more information about the forthcoming Conquest of Nerath. If link doesn’t work for you – it’ll be because you’re being redirected to the Amazon UK site which doesn’t yet have the game. I hope this doesn’t point towards distributive issues for WoTC.

This is a big issue for Wizards of the Coast. The game is set for release towards the end of June in the States and it follows the Castle Ravenloft and Wrath of Ashardalon board games. Three board games into the series suggests that WoTC feel that they’re onto a winner with this.

Conquest of Nerath has players position armies of soldiers, siege engines, monsters and dragons in order to defend the land from the undead. The game comes with a rulebook, a fold-out game board, 110 cards and over 250 playing pieces. It’s not that cheap, coming in at just under $80, but it’s expected to be popular. 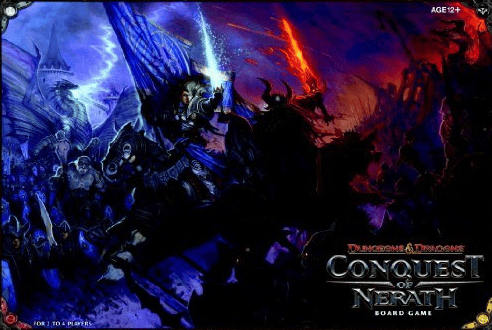 Been playing through Wrath of Ashardon with the Tayport refugees and it’s pretty fun. Quick, and easy to play and Co-op, so no-one’s stuck being DM. One of the purest D&D experiences I’ve had.