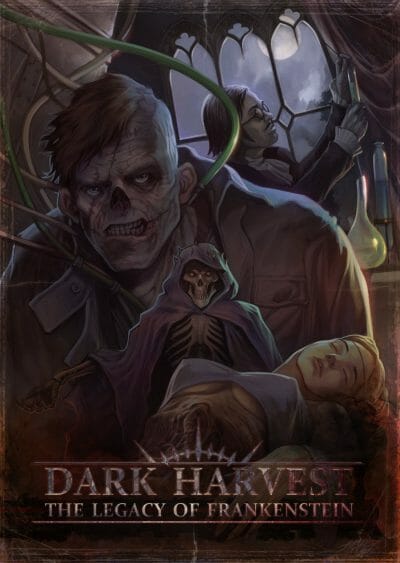 I’ll admit to something of a rollercoaster of expectations for Dark Harvest. Here’s how it goes; firstly the Twitter account EmbraAgain follows both Geek Native and my personal account, I’m in a train speeding towards London at the time, so my curiosity is restricted by the dodgy mobile internet access I have. RPG author! Looking good! Near Edinburgh! Awesome. Shortly afterwards the email comes in asking whether I’d be interested in reviewing a new RPG. Would I? You bet! Dark Harvest? Sounds interesting.

Looking good, huh? Here’s my admission… my heart sank when I discovered the full title of the RPG was Dark Harvest: The Legacy of Frankenstein. You see, I’ve read Frankenstein twice and I don’t like it. After reading it the first time, and being disappointed, I stopped reading for a while. I had been on a binge of the classics, lapping up beauties like Ivanhoe and Moby Dick but Shelley’s over rated classic stole my enthusiasm and put me off reading for weeks. The second time I read it I wanted to make sure I wasn’t mentally ill the first time I read it, that I hadn’t missed something or anything that could explain my enthusiasm for the likes of Byron and Poe and yet my utter “meh” for Shelley. I simply confirmed to myself that I didn’t really enjoy Frankenstein. It should have been a short story.

It’s important not to judge a book by it’s cover. I kept on going with Dark Harvest: The Legacy of Frankenstein and was soon rewarded. Cubicle 7, I saw, that’s a sign of quality. Dark Harvest also uses Cubicle 7’s Heresy gaming engine – the one from Victoriana 2, except it’s been simplified and streamlined. Things are picking up.

As it turns out; I really enjoyed Dark Harvest: The Legacy of Frankenstein. To an extent it suffers from the same “so what?” that haunted the book. It’s an adult book, that doesn’t paint things in black and white but this just means that the “so what” becomes an asset. For example, you could run this game where the PCs are the agents of Frankenstein, actually trying to make the world a better place even though they represent the side responsible for the vile Dark Harvest. Or, of course, you could play as an international agent sent into to spy on Promethea or a member of the resistance.

Dark Harvest begins in with an alternative history of Europe, small tweaks at first but with some dramatic reveals at the end. The country of Romania does slightly better in the European wars and politics than our history suggests, its borders grow, it’s seen as more neutral and more stable than the nearby Baltic states. A minor but reformist diplomatic finds himself in power after the ruling Prince is cast down. He’s embarrassed but professional. He leads Romania with a steady hand, massages in reforms and slowly becomes a national hero after years of on-going successes.

Imagine the “gotcha” when the ruler turns out to be Victor Frankenstein – who looks far younger than he should be. All that money invested into research and Universities makes sense. He renames the expanded country Promethea ( remember that Shelley’s original has the full title “”Frankenstein: Or, the Modern Prometheu”). In order to protect his scientific secrets the borders close and the “enhanced” military take control.

The Dark Harvest is dark. The elite are able to augment their bodies, replacing diseased, weak or unfashionable limbs and body parts with parts harvested from the unwilling populace. Despite Frankenstein’s intent, this harvest is not restricted to the newly dead but to the living. The countryside is full of people with limbs removed. Parents scar their babies to ensure their beauty is not worth harvesting. This is a dark story.

Dark Harvest: The Legacy of Frankenstein is rich with flavour. Not only is this an RPG that begins by setting the scene before the mechanics but it includes a number of short stories before the mechanics. In so many ways this is the RPG that authors built. If you’re a gamer who’s interested in the backdrop, in the story and in the drama – then I really, strongly, feel that Dark Harvest is for you. If you’re interested in the big explosions, escapism through higher numbers and four colour heroics then, equally, Dark Harvest probably isn’t for you.

That’s not to say the mechanics let the game down. Far from it. In fact, the “Black Dice” systems is one of my favourites because it respects probability better than most and adds that extra touch of drama.

What do I mean? In a standard d20 system each face of the dice simply represents 5%. So rolling 12 or higher is just %5 harder than rolling 11 or higher. Rolling 15 or higher is just 5% harder than rolling 14 or higher. Any bonuses to your d20 roll can be worked out in that standard arithmetic pattern. With the Heresy Engine players combine attribute + ability and roll that number of d6. Each 1 and 6 counts as a success. Those are the dramatic numbers. The harder the task the more successes you need. If you get a 6 then you can roll again; a 1 or 6 counts as a success. Nice and dramatic. If it’s a tough challenge you need lots of successes. Here’s the thing, though, if there’s something acting against you (and perhaps Tough Challenge versus Impairment isn’t defined well enough) then you add black d6 to your roll. For every 1 or 6 the black dice come up with you loose a success. That’s not only dramatic but it starts to add an element of geometric probability to the randomness. It means the high numbers (and the low, if there are no black dice involved) are rarer than the average.

When it comes to evaluating Dark Harvest: The Legacy of Frankenstein it feels appropriate to reflect on the over all production values. This review is based off the PDF version of the game. The PDF is presented well. I suspect it’ll be three times as good as a printed book. Lowson is an excellent writer but the credits mention James King for layout. He’s done very well.

There you have it – this reviewer isn’t a fan of the original Frankenstein but enjoyed, very much so, this RPG. Dark Harvest presents a world that invites story based RPG adventure, with a system that withstands modern scrutiny but doesn’t get in the way. It’ll be a fun one. Well. Kind of.

Disclaimer: This RPG was provided for the purpose of review, nothing else exchanged hands and no promises of a positive review were given. The Dark Harvest homepage can be found here.

See… I gave up reading Frankenstein last week for pretty much the same reasons.

My gut feeling is that you’ll enjoy Dark Harvest. I think there’s a demo on at Compulsion.

Yup, there is.
I’m running it. 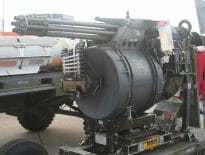