You are here: Home / Music / Boba Fett playing Zelda music on the accordion

You’ll watch this video and recognise Boba Fett. That’s easy. That’s a given.

What about the music though? It’s the “Lost Woods song” from The Legend of Zelda: Ocarina of Time. Yeah. He’s also playing it on an accordion.

I think that’s the only logical musical instrument for Fett.

Now that you’ve had your third meme eye opened – what do you think? Would you have given any money to busking Boba Fett? 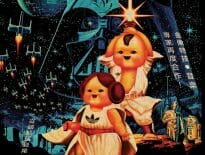 Art Freaky Chinese Star Wars babies pimp Adidas
Movies Attack the Block trailer
💰 Copper Coins 💰 Geek Native is an affiliate and may earn commission on purchases you make from third-party sites.
🍪 Privacy & Cookies 🍪 The site uses cookies to survive. By accessing the site, you agree to use your browser to control cookie use or take 1d4-3 privacy damage (tracking). If you defeat cookies via ad blocking, please consider the Patreon. An intro to cookies, and how to control them, can be found here. I Manage Cookies