You are here: Home / Movies / Attack the Block trailer

Wa-hoo. British sci-fi. British sci-fi with Nick Frost (who looks like he has Paul hair). This is a film from Joe Cornish and the production team of Scott Pilgrim and Shaun of the Dead.

Rooting for the aliens too? It reminds me of a mashup of Harry Brown and Predators. Perhaps will get a Michael Caine cameo? 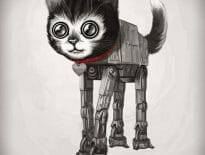