You are here: Home / Games / PC / League of Legends: Creating Karma the Enlightened One

This has popped up onto my radar because Riot Games show the artistic process behind the creation of the new hero Karma. I love these time lapse drawings. If anyone’s got any insight into the game League  of Legends then I’d love to see them in the comments below.

Even as a young teenager, Karma spent her time in meditation in the Lotus Gardens. It was said; “that girl can not only weather a storm, but calm it”.

When Noxian troops invaded southern Ionia, Karma’s village was one of the first to fall and the few survivors captured. It was here that Karma found her calling, she exploited the insecurities of the Noxian commander and negotiated the release of the villages to the north.

Since then she’s become a figure head of the Ionian resistance. 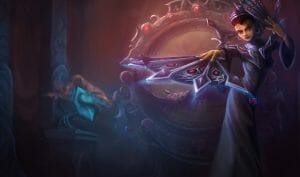 Heavenly Wave: Karma sends forth a wave of hidden blades from her fans, dealing magic damage to units in a cone in front of her.

Spirit Bond: Karma bonds an ally or enemy creating a beam between them. Bonded allies have increased movement speed and bonded enemies have reduced movement speed. Enemy units that come in contact with the beam take magic damage, and champions who pass through the beam receive the same movement speed modifier as bonded champions.

Mantra (Ultimate): Karma empowers her next ability to do an additional effect. Mantra is available at level 1 and does not require a skill point.

League of Legends: Creating Karma the Enlightened One