There’s an updated version of Baldur’s Gate on the way. The Baldur’s Gate: Enchanced Edition is being put together by Overhaul Games, a team that comprises some of the original Baldur’s Gate crew, and although it is not a full game it will feature new content and new soundtrack.

Sam Hulick, the BAFTA nominated and multi-award winning composer, has signed on for the musical task. Hulick is known not just for Red Orchestra 2 but his work for BioWare across the Mass Effect trilogy.

In a press release, Hulick said;

“The music of Baldur’s Gate and Baldur’s Gate II was a huge inspiration for me as a composer who was just venturing forth into the world of writing music for games. So to be able to travel back in time, so to speak, and score original material for the Baldur’s Gate saga is a dream come true for me.”

Spotify users can sample a short teaser/playlist of his work that I’ve put together below. 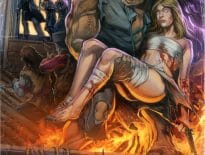