My copy of LittleBigPlanet 2 is sitting on the table waiting to be played. It just has to wait until I finally finish off Fallout New Vegas. That’ll happen soon because I really want to play LittleBigPlanet again.

What I don’t want is to stumble into stupid American political diatribe.

The team over at Destructoid has bad news for me, you and anyone with a brain. LittleBigPlanet 2 has been swamped user created levels about killing the president of the United States!

How insanely stupid is that.

This is a month where there’s been discussion in the press about the extremely rough language the right wing of American politics uses. Sarah Palin’s campaign had a map with crosshair targets over senators who they disagreed with. The Palin camp say the use of the crosshair and “target” wasn’t supposed to suggest “gun” or “sniper rife” but the crosshairs found on maps.

Here’s a list of some of the anti-Obama LBP2 levels:

There’s no suggestion that any official group are behind the kill Obama LittleBigPlanet 2 levels – it’s probably just messed up kids from Republican families expressing themselves poorly. It’s just a shame that they think this is the venue to do it. 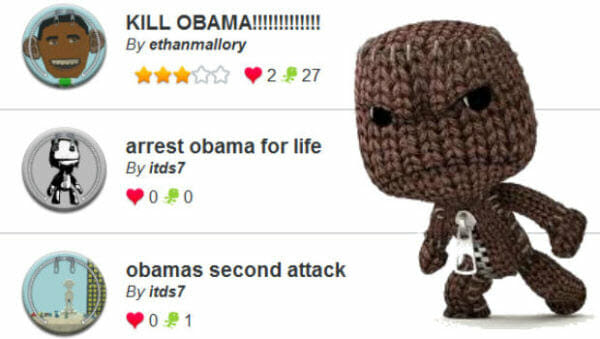