You are here: Home / Games / Tabletop & RPGs / Advanced Fighting Fantasy and Out of the Pit re-released 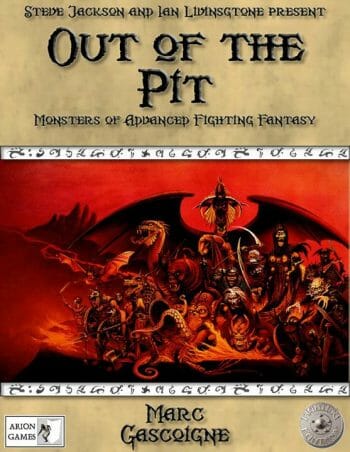 Arion Games have teamed up with Cubicle 7 to bring us that old stalwart of introductory RPGs – Advanced Fighting Fantasy.

The new version of Advanced Fighting Fantasy is due out in May 2011.

It was an early favourite of many a gamer group and I’m really pleased to see Cubicle 7 re-publishing Out of the Pit to help launch Advanced Fighting Fantasy. That’s enough to whip up a whirlwind of nostalgia.

Out of the Pit was a key supplement for the RPG. This 128 paged, black and white, supplement is also due out May 2011.

The supplement will have a host of monster stats, 250 illustrations, maps and plenty of tables and charts. A glance at the authors suggest that we may not be changing much from the 1985 original. Who are the authors? Steve Jackson, Ian Livingstone and Marc Gascoigne.

As a way of an illustration to just how solid Out of the Pit has been for all these years. I bet you can still find it for sale at Amazon.

Advanced Fighting Fantasy and Out of the Pit re-released

Geek Stuff Star Wars Bookends: The Mos Eisely Cantina in your…
💰 Copper Coins 💰 Geek Native is an affiliate and may earn commission on purchases you make from third-party sites.
🍪 Privacy & Cookies 🍪 The site uses cookies to survive. By accessing the site, you agree to use your browser to control cookie use or take 1d4-3 privacy damage (tracking). If you defeat cookies via ad blocking, please consider the Patreon. An intro to cookies, and how to control them, can be found here. I Manage Cookies