You are here: Home / TV / Watch NBC’s The Cape today – that’s before it airs on TV 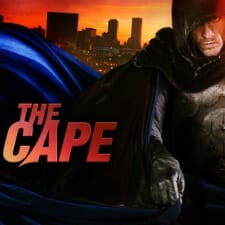 NBC’s new hero show The Cape will premiere today – but here’s the catch. It won’t premiere on TV. To get it yo need DC Comic‘s free iPad app (AppStore link). Yup. You need an iPad.

This is clearly a DC Comics enabled project but it’s pretty good of NBC to play along. The assumption I’m making is that the content will be geo-restricted so iPad owners based outside the United States still won’t be able to watch it. Even if you’re in the States you only have between January 5th to January 8th to take advantage of this. The show gets its “TV premiere” on the 9th.

It’s also worth noting that this “The Cape” is described as “inspired” by the DC Comics character. It’s not based on it. In the show David Lyons plays Vince Faraday who becomes a secret crime fighter after he is unfairly accused of a crime which makes his life as a cop pretty tricky!

The iPad premiere will certainly help build some buzz around the show. It was social media blog Mashable who had the exclusive on the news so the marketing tactics behind this venture are clear. They the internet to be interested in the show. I suspect they’ve succeeded.

Console Swimsuit competitions in Rune Factory Oceans jRPG…
Art Black Mana teaser for Magic: The Gathering –…
💰 Copper Coins 💰 Geek Native is an affiliate and may earn commission on purchases you make from third-party sites.
🍪 Privacy & Cookies 🍪 The site uses cookies to survive. By accessing the site, you agree to use your browser to control cookie use or take 1d4-3 privacy damage (tracking). If you defeat cookies via ad blocking, please consider the Patreon. An intro to cookies, and how to control them, can be found here. I Manage Cookies