You are here: Home / TV / Why the BBC want to ban David Tennant’s ad

David Tennant stars in a new add for Virgin Media. It’s an add that highlights the power of the new Virgin Media TiVo boxes and it actually features Richard Branson himself.

The BBC has a problem with it.

The centre of attention is David Tennant’s role as the tenth Doctor in Doctor Who. The BBC are worried that Virgin are unfairly using David Tennant’s close assocation with the show. In other words, the BBC are worried that the ad might tarnish the reputation of Doctor Who. I doubt they’re not happy that Virgin Media aren’t paying any license fees either.

Are the BBC right to be so protective of Who?

Via The Daily What.

Why the BBC want to ban David Tennant’s ad 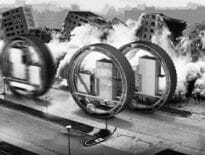