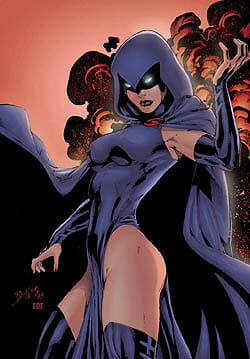 The CW is the American TV channel that’s responsible for the likes of Supernatural and Smallville. As Smallville comes a close we’re speculating on what might replace the series. Variety think another DC hero might be in the line up.

I, like so many other geeks, first encountered Raven during her stint at the Teen Titans cartoon (voiced by Tara Strong). That Teen Titan series also featured Robin, Starfire, Beast Boy and Cyborg. As I recall; it was pretty good and I’d probably still watch it if I could find it on UK TV!

Raven’s history begins before the Teen Titans, of course. Created by Marv Wolfman and George Perez of DC; Raven is the daughter of a demon and a human. She has empathic powers and can teleport herself into people’s minds. Her mental aspect/her soul self can also leave her physical body for spying or combat.

She has to battle with her demonic half. For a while she was a villain known as Dark Raven. Equally, she’s spent time as the White Raven as a crime fighter. She was denied entry to the Justice League. There are a few other quirks too. During the Crisis on Infinite Earths her location was unknown even to Monitor – who’s supposed to be able to track everyone cross all parallel dimensions. One theory is that she ascended into a non-parallel dimension; something else entirely. She’s also spent time in Azarath, where she grew up.

The current Raven is actually a reincarnation – hence the body of a teenage girl (doesn’t that sound like The CW to you?) – trying to start a fresh.

The question is; will we see Raven on The CW? The story line and characters certainly sound like their cup of tea but is she famous enough for the non-geeks out there? Can the Raven actually replace Superman in the TV slot?

Raven on The CW