I can already imagine them being hurled at unruly players. Is there anything wrong at throwing things at players? You shouldn’t throw anything at the GM as you might topple the GM screen and surely that would end the world.

I suppose the dangers of throwing things at players is that you might knock the juice over and spill all over the detailed map.

What about holding up the squishy dice as if they were a magic relic of power? Check out this picture. 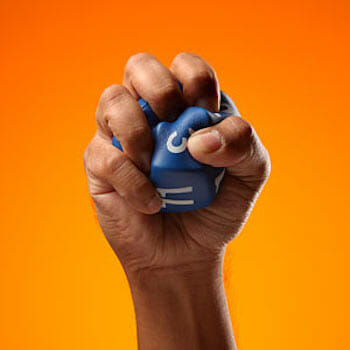 That will only look familiar to the most devoted of Geek Native readers. You see these look very familiar to V Shane’s designs for the Support the RPG Industry logo.

What do you think? Buy a bunch and finally launch the campaign?