I wonder if the license fees required to use Dungeons & Dragons on your merch officially are the same as last month.

Nevertheless, Heroes Inc has a fantastic Rolling Dice Builds Character t-shirt coming to retail in February that does.

The burning dice design has a large white d20 with the D&D ampersand in the centre. It’s flanked by 19 and 74, as Dungeons & Dragons will turn 50 this year.

It’s the caption that I like “Rolling dice builds character”. It’s true on at least two levels and proudly geek.

Forbidden Planet has S, M, L, XL and XXL sizes on order and reveals the t-shirts are 100% black cotton. 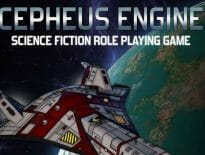 Tabletop & RPGs Mongoose is in talks with Cepheus Engine publisher…
wpDiscuzComment Author Info
Manage Cookie Consent
This site uses cookies 🍪, and links are ads that may earn bloggers some money 💰, and with this alert, I very much hope that these dark truths 🧌 are acknowledged.
Manage options Manage services Manage vendors Read more about these purposes
Preferences
{title} {title} {title}
Loading Comments...