You are here: Home / Games / Tabletop & RPGs / Mongoose is in talks with Cepheus Engine publishers over Traveller license concerns

There’s concerns Cepheus Engine publishers have a bleak future as and when Wizards of the Coast deauthorises the OGL.

How are they connected? Cepheus Engine was originally based on the SRD of Mongoose’s first edition of Traveller, which was licensed under Wizards of the Coast’s Open Gaming License.

On their forums, Mongoose said they’d worked with Traveller OGL publishers on a new SRD and build that on the Traveller Core Rulebook Update 2022.

The news was warmly welcomed at first; however, several Cepheus publishers expressed concerns after a while. John Watts of Independence Games said;

Well, as it stands now, the Cepheus Publishers are in a position where the big decision is now on Mongoose to make. In short, if you want the Cepheus publishers (including myself) to survive, the best way for you to help us in these negotiations is to go somewhere that Mongoose will hear you (the Traveller Discord, Mongoose’s forums, CoTI, social media) and tell them that you want them to allow Cepheus Engine to continue without caveats. Without being forced into costly rewrites to go along with MgT2e.

The publishers have already done everything they can. If you want us to survive, your voice will need to be heard. It really is that simple.

Mongoose has been quick to respond and, on their forums, said;

We are still talking to the Cepheus publishers, but have already told them that if WotC removed OGL1.0a with immediate effect, we would support Cepheus legally and indefinitely. There is thus no time pressure and discussions continue.

On a Save Cepheus Reddit thread, Mongoose Matt, the company owner, added;

As things stand, we have told the Cepheus publishers that, in the event that WotC nuked the OGL1.0a and everything published under it tomorrow, we would cover their work, legally and indefinitely. Everything else is up for discussion.

At the start of our conversations with the CE publishers we made it clear that we knew both parties were starting from two different positions and that we were looking to find a path that ran between the two of them. We are all Travellers at the end of the day,

We have recently laid out another set of proposals to the CE to be discussed. Still waiting for feedback but it seems some are positive, some are on the fence and one is dead set against them. So, we keep talking to find a way through – however, our offer to cover their work means there is no time pressure and we can talk things through properly. There is no need to resolve this overnight.

Where does this leave publishers such as Independence Games, Stellagama, Moon Toad Publishing and Zozer? Upshot is at time of writing, we don’t know. Rocky Mountain Navy posted an article earlier this week ‘The Open Death of Cepheus Engine’, highlighting where Mongoose is looking to produce a license allowing publishers to utilise material based on Traveller Open Content. I don’t know how much this will be like the MGT2e / TAS license which I suppose you could call a precursor to WotC’s OGL 1.1. This license allows your published content to be considered for reuse as Mongoose’s and they can use it without recompense to you.

Importantly, there have been requests not to pester Marc Miller, the lead designer of the first Traveller. The debate is between Mongoose and the licensees. 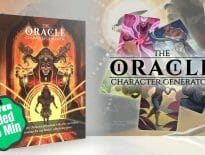 Tabletop & RPGs The Oracle Character Generator: Over 1 billion cha…
wpDiscuzComment Author Info
Manage Cookie Consent
This site uses cookies 🍪, and links are ads that may earn bloggers some money 💰, and with this alert, I very much hope that these dark truths 🧌 are acknowledged.
Manage options Manage services Manage vendors Read more about these purposes
Preferences
{title} {title} {title}
Loading Comments...