Andrea Macchi, Max Casteallni and Mauro Nanfito are giving all the royalties of the DMsGuild Dungeons IN Dragons to Extra Life.

All this, and it’s only volume one. Dungeons IN Dragons – Fabulous Compendium – Vol 1 costs $6.80 and weighs in on the electronic scales at 41 pages.

The supplement has help for DMs in the world of new encounters and other pre-made materials. At the core, there are maps which involve dragons in a new way. The title isn’t a typo.

You’ll get the following 5e goodies;

The Dragon Crafter Artificer Subclass is a dragon scholar and alchemist who uses spells and new draconic infusions to replicate dragon powers and oddities!

Red dragon map and adventure “Alice in Dragonland”: the actual “dungeon IN dragon,”. This adventure will take your party inside a living, (fire)breathing red dragon for one of the most dangerous and wild adventures ever seen on the DMsGuild!

Three green dragon maps & adventure hooks: three variations of an ancient green dragon carcass used by different monster clans and tribes as their camp or cave. Each version of the map has two sorts of encounters (one of which is lore-related and designed to interlace with the official adventure “Tomb of Annihilation”), adventure hooks, and multiple CR tiers (1-3, 4-6, 7-10)

2 New Backgrounds: add dragons to your game and characters’ backstories. The Carcass Robber background is for PCs who desire to feed themselves and their party through resource extraction and management. The Dragon Slayer background is for those seeking fame and money by slaying dangerous animals. 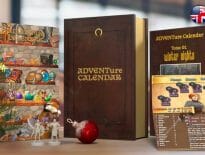 Tabletop & RPGs ADVENTure Calendar: An eco-treat from Garmr Games …
wpDiscuzComment Author Info
Manage Cookie Consent
This site uses cookies 🍪, and links are ads that may earn bloggers some money 💰, and with this alert, I very much hope that these dark truths 🧌 are acknowledged.
Manage options Manage services Manage vendors Read more about these purposes
Preferences
{title} {title} {title}
Loading Comments...