You are here: Home / Games / Tabletop & RPGs / The Quintessential Fighter: A d20 blast from the past seeks Kickstarter 5e success

Before D&D 5e, even before 4e, Wizards of the Coast opened up 3e’s d20 rules to third-party publishers. Did it work? Yes, because we still have D&D today, and it gave us Pathfinder, but you’ll hear heated pub debates about how well it worked.

One frequent comment is that the open license resulted in a sea of third-party content. Mongoose Publishing’s Quintessential series is often a central part of these debates; was a book per class too much or just perfect? We’ll find out as Battlefield Press is coordinating to bring The Quintessential Fighter to 5e through a Kickstarter.

Battlefield Press is working with Mongoose on this title, one of the best-selling d20 books. It’s Battlefield who are revamping this book and the whole range.

A Fighter is never just someone swinging a sword in thick armour. Battlefield makes that point and says that a player can quickly and simply give their Fighter a whole background and personality by using the material offered in this book.

The rules also include strongholds so that your PCs can build and manage these headquarters and strategic assets.

The pledge tiers are straightforward, and if you support the project with $15 or more, you’ll get a PDF copy of the book as a thank you.

The Kickstarter from Battlefield Press didn’t include any art, so Geek Native came up with some (hopefully) suitable warrior art!

The team estimate fulfilment is happening around March 2023.

The Quintessential Fighter: A d20 blast from the past seeks Kickstarter 5e success 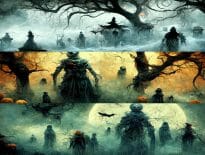