It’s a world in which were-creatures are (secretly?) at war in our society. You can see the pitch on the project page.

The game has been funded, with the $10,000 asking price being met quickly and more than $17,000 pledged at the time of writing. There are two weeks to go.

With a large and diversified assortment of individual human Host characters and two dozen interchangeable animal Totems that may be mixed virtually forever, the possible number of Dizhi power configurations is in the millions.

The long-running KLAW series follows Angel Thomassini as he first encounters the secret world of Dizhi as the unwitting recipient of the Tiger Totem. His world is turned upside down from that moment on, introducing him to an entire universe of hidden powers and agendas struggling to maintain a balance between order and chaos. As he grows through the series, he encounters a cast of conflicted characters and priorities, each revealing yet another layer of intrigue. The series has been a best-seller around the world with nearly 600 pulse-pounding pages released to date, continuing with the upcoming release of volume 4: The Cycle Reborn!

You can back the campaign by helping to share it, and anyone who contributes $1 or more will get access to the add-ons and pledge manager.

If you can find $13, there’s volume 4 of the KLAW graphic novel as a reward. Alternatively, $35 will get you all four novels in PDF and volume 4 in hardcover.

The card game unlocks at $45, shipping worldwide from the initial print-run of 1,500 but without the novels.

The next tier up is $74, but that adds The Forgotten Zodiac expansion set rather than the novels.

The limited tier of $99 has all four graphic novels in hardback and PDF, with the KLAW Saga Cardstock Print Set that’s more popular.

It’s at $112 that the deluxe set appears, with the core rules, the expansion set, dice tower, game mat and action cards.

There’s a higher retail tier, but if you want the game and graphic novels, you’ll build that yourself in the add-ons.

Magnetic has December 2022 as their estimated delivery date. That soon! 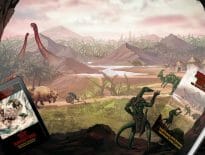