The first Kickstarter launched by Granite Glyph Publishing set a high goal of $50,000 and offered a horror without 5e. It’s speeding to success, though, with hundreds of backers.

The team has the experience, and the pitch looks great. Creators like master Ed Greenwood, Noura Ibrahim, Gwendolyn Kestrel, B. Dave Walters, Richard Lee Byers, 7th Sea creator John Wick and many others are lined up to help. You can see the latest total or find out more from the pitch page.

It’s free to download a preview of Hellguard: Curse of Caian is available. The sneak peek is short but certainly gives you an idea of the layout and use of icons. The two-pager is available from Google Drive as a PDF.

Monster Fight Club, Campaign Coins and Level Up Dice are involved for the minis, coins and, yes, dice that come with the successful campaign.

Hellguard: Curse of Caina is a tabletop roleplaying game inspired by Diablo, Castlevania, Call of Cthulhu, and other dark fantastic worlds. The game focuses on the land of Caina, a continent buried in the long shadow of an infernal war that twisted the landscape and warped the hearts of its people. Villages scrape by on the edges of barren wilderness, ignorant of the supernatural evil that walks the streets. Ancient apocrypha, ripped from the tongues of tortured saints, portend that Hell will wage a new war on humanity from the shadows. But against the specter of annihilation stand the few damned souls with the power—and the will—to save this tragic world from itself.

The first reward tier is $20, though you can support the campaign with cash and clout for less, unlocking the core rules, pre-genned characters, battle maps and creature tokens as PDFs.

Double up to $40, add in shipping, and you’ll have a hard copy of the ten one-night adventures plus core rules added to your supporter rewards.

Hellguard: Curse of Caina has a lot more to offer, though. Backers at $80 will get the deluxe collector’s box, five 15mm miniature, pre-genned characters, one red master 30mm miniature, eight dice, five double-sided 11″x17″ battle maps, and cardboard tokens and all the digital rewards with stretch goals.

At the very top is the $200 Founders tier, which ads in luxury metal dice, coins, exclusive playtester access and your name printed as a playtester. Many dozens of people have taken that option.

Granite Glyph Publishing estimates March 2023 for the digital bundle and Jan for the hardcover, which doesn’t seem right. Then it’s June 2023 for the box set, so perhaps the hardcover for Jan is a finger slip. 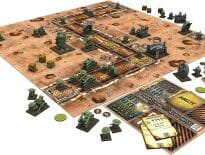 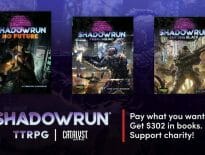