Look closely, and you’ll see the cute maids and kitchen staff seem to be wearing backpacks.

You don’t need to watch for long, though. The trailer for NBC Universal and Key’s Prima Doll soon shows us robots in the kitchen, robots at war and our young ladies commanding them.

What’s going on? The characters are golems, metal constructions made for war which look human. Terminators, I suppose.

Prima Doll is an anime about the golem girls trying to adapt to everyday life after the end of the conflict.

Cafe Kurokoneko-tei. It is a coffee shop located in a corner of the 5th district of the Imperial Capital. Working there are girls who are autonomous mechanical dolls (automata), the culmination of the best of technology. The Great War just ended a few years ago. The girls were created as weapons there. Eventually, the peace that followed the war arrived. Restored to look as good as new, dressed in shiny kimonos They are looking for a new role, and singing in high spirits. Wouldn’t you like to spend a wonderful time with them?

Geek Native has run two trailers for Prima Doll before, but it’s easy not to associate them. The first begins with spooky bells and the second so upbeat I called out it could be an entirely different show.

This, the third, is different again. Hats off to the trailer editing team, who find tone and stories within a single series.

The series stops the trailers and hits Japanese TV on July 8th. 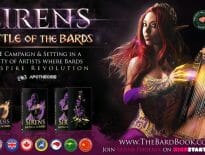 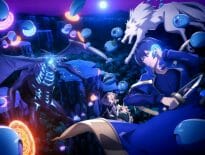