You are here: Home / TV / Anime / The Corporate Drone Wants to Be Healed by a Little Ghost Girl (and the dance track)

Well now. The translators keep tweaking Shachiku-san wa Yо̄jo Yuurei ni Iyasaretai, making the English title a little less creepy. “Slave” has been replaced by “Drone” and “Loli” with “Little”. This is wise.

The latest trailer isn’t creepy at all; it’s a weird mix of a happy dance track and some tearful eyes.

The concept is straightforward – a young woman is doing the problematic thing of working herself to literal death in the office. It’s horrible to think that this happens in Japan, but, I gather, it sometimes does.

A ghost girl wants to stop her.

I’m not sure how they can spin this into a whole series, but as it’s based on Imari Arita’s manga, I assume there’s plenty of material.

One approach to making this is last is through the narrator. Each episode will have a different one.

Seen in the trailer are more supernaturals than the little ghost girl. There’s a black cat that surely may be the catgirl The images show demon girls and strange white animals.

The series hits in the air in Japan, via Tokyo MX and other stations on April 7th. 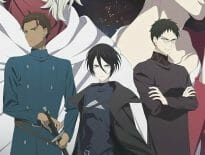 Anime Everyone looks so sinister! Requiem of the Rose Ki… 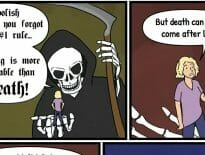