You are here: Home / Games / Tabletop & RPGs / Machine guns versus monsters: Forgotten Ruin gets an RPG

There’s a fantasy-meets-military series by Jason Anspach and Nick Cole called Forgotten Ruin which mixes orcs, trolls and dark wizards together with American special forces. The idea here is that you don’t get angry about an evil horde sweeping over outlying villagers; you send in Rangers with guns.

A Kickstarter to turn the series into a tabletop is going well, doubling the ambitious target of $7,500 in just a few days. You can find out more, including the shouty-army style pitch video, from the project page.

The RPG is based on Small Niche Games’ Operation WhiteBox which has a pay what you want silver-seller on DriveThruRPG. Awkwardly, Small Niche Games simultaneously describe it as Free while suggesting you pay $5 for the 183-page download. $5 feels like good value to me.

As you might have suspected, the Forgotten Ruin series was penned by tabletop RPGers, and so the authors want to complete the circle and bring the setting to life as a game.

Forgotten Ruin: The RPG is constructed on solid, old school gaming with an eye toward ease of play, adaptability, and maintaining the flavor of the novels. Using Operation White Box and its compatibility with resources from Swords and Wizardry White Box as a basis, Forgotten Ruin: The RPG builds on what has come before to allow for rules that are easy to follow, while also giving the Observer Controllers (the game master) unrestricted freedom to blaze their own trail and truly make the game their own.

A pledge of $10 will get the complete game as a thank you and get in PDF along with other digital stretch goals.

At $35, backers will get a print edition and a PDF edition, but shipping is restricted to the USA.

Equally, backers at the $50 tier get the game and copies of the first book in the fiction series.

There are higher levels, adding in dice, t-shirts and other goodies.

Delivery on the project is swift, with June 2022 identified as the current estimate.

Machine guns versus monsters: Forgotten Ruin gets an RPG 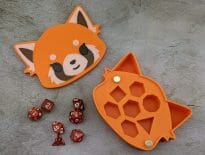