You are here: Home / Games / Tabletop & RPGs / As horribly brutal as you want it to be: A review of the Red Giant RPG

The attempts to turn Berserk from a manga into an anime get as far as one brutal scene and then, traditionally, struggle. I’ve often wondered whether it’s such a shocker that the production team, or backers, can’t get beyond it.

Red Giant lists Berserk as an influence, along with others like Claymore, which while less adult, are just as bleak in their own way.

Rookie Jet, who publish Red Giant, have done anime RPGs before, such as Over Arms, inspired by titles like Jo Jo’s or Gimmick Zero which leans into titles like Bubblegum Crisis. Each time the world setting is alluded to is created as in sketches only, gaps for gamers to fill creatively within the framework of the rules.

And Red Giant is no different.

So, while the book begins with a strong 18+ warning, cautioning that you’re heading to murder and extreme violence, you don’t have to.

Red Giant is only as horribly brutal as you want it to be.

The RPG isn’t an engine that conjures up Berserk-style shockers. It’s a hex crawl in a deadly world, and that’s no bad thing. It’s a cursed world RPG.

In keeping with the hex crawl spirit, there are survival rules in Red Giant. Characters need to eat and drink at least once every three days or become Malnourished.

On day five, without food or water, characters die.

Much of the death through starvation risk in the cursed world comes from travelling. As part of game prep, Game Masters will have created maps that begin with four one-mile hexes and a Civilization/base in one of them. Red Giant is about moving through these hexes.

As a GM, you can prepare more hexes in advance or wait until Players head there and check the game’s tables.

A random sampling of those tables for this review has me scribble down a field of red grass, claw marks on trees and a calm stream. As you can see, either the GM must have plenty prepared, must improvise cleverly on the spot or, as is my recommendation, collaborate with the players to create the world.

Red Giant has a table of travelling times, with it taking a whole day to travel a hex in the worst possible conditions.

Players will have an eye on exploring the world to complete missions, get loot and partake in the hex crawl experience and an eye on keeping their characters alive.

Those characters will have four core stats;

The latter three are determined by the Archetype to which the character belongs. More on that later.

Checks are made when the outcome is uncertain, and it matters if there’s a failure. Typically, two dice are thrown for two attributes, combined, and then a GM assigned target number must be met. Tools and bonuses may also change the total.

The dice you roll depends on the value of your attribute; it might be a d6 or a d8, for example.

For example, climbing a wall to escape an attack might be a Strength + Reflex check.

There are rules for advantages and disadvantages, the initiative system gives a 50% chance of all PCs going first, and combat happens over turns.

I only had two moments of “What, what? I don’t get that.” with my first read through of Red Giant; one was with sleeping and the other with damage.

My initial reaction was to try and parse that into the rules as described; two dice added together and compared to a target number. +1 would be a bad choice of target number.

I took to Reddit, and the answer is simple as you expect. It’s not really a “check”. You roll the dice assigned to your attribute (Reflex in this case) and total up the modifiers (+1 and then -1 in this case).

My confusion about the rules of sleeping/keeping watch is more of a puzzling shrug. Rookie Jet hasn’t allowed large groups to split watch to avoid any character going for too long without sleep.

Despite those two small wobbles, I immensely like the Red Giant systemIt’s’s both light and beefy at the same time. It’s light in what you need to read and understand but beefy in terms of impact.

I’ve said and standby the claim that Red Giant isn’t a setting that creates dark, brutal or adult situations. I also said that the rule system sketches out a framework that might encourage that.

That framework is most evident in the characters.

All characters have an Archetype, or class if you want, which determines their skills and special stats. Special stats are; health, spirit and sanity.

Health hitting zero means death. Spirit zero means you can’t cast magic until for the day. Sanity zero means your character is out of the game, at least as a PC.

Sanity, therefore, is the first really adult thing in the game. It can be challenging, and players are encouraged to roleplay the effects of the reducing stat.

Most monsters have a Sanity Rating in Red Giant, and encounters with them require PCs to make a Sanity Check (Mind + Sanity) with failure resulting in a loss of the PCs Sanity score.

Sanity recovers in the game more easily than it does in life. In fact, “Sanity” doesn’t feel quite right as the term for what’s actually happening in Red Giant, but I struggle to suggest a better phrase. “Shell shock”, perhaps, or something around post-traumatic stress.

Given your character’s Archetype governs these three significant scores, health, spirit, and sanity, you’ll be invested in what they are. Archetypes can, though, be rolled randomly.

Archetypes also determine three Skills. You get one of these three at character generation and then unlock two more as you level up. There’s no XP in Red Giant; you level up with the GM thinks you should.

For example, the Slayer has a skill that lets them recover a Sanity point each day, the Sorcerer has one which gives them a “Staff of Barrier” item, and the Traveller has one, which means they don’t need a Map to navigate safely (part of the hex crawl mechanics).

The last thing I wanted to say about characters in the Red Giant RPG is on Exchanges. Once again, here’s a system that does not require gory detail, but might encourage it.

Characters can start with one to three Exchanges, and earn more during gameplay. They are powers that come with a cost, and the cost is the interesting part of them.

The Blood Pact Exchange, as a second example, lets PCs summon a foot high devil that can spy or even steal stuff. This also costs 1d4 health.

Other exchanges have costs like “Something always goes wrong during the job” or “… your neck snaps” (eventually).

It’s $15 for the Red Giant PDF, and that feels like money well spent. The softcover is $35, which would require more thought.

You see, the layout and design of Red Giant is minimalist and uses lots of chunky blacks and blood red. It works for me on the screen and actually suits my Kindle very well, but I’m not sure it would look as good in print.

Equally, I love the art style of black and white, not always anime but always leaning towards those inspirational sources like Vampire Hunter D. I just wish there was more.

Half the 120-pages, thereabouts, is taken up with the monster and creatures list. The Bestiarium. I wish it was illustrated.

Overall? I don’t hex crawl very often, but Red Giant will always be a contender when someone suggests we give it another go.

I’m a Red Giant fan. I’d play it bleak and brutal but with collaborative descriptions of the cursed world as a way to further entangle players into the world and make it less about finding that next bite of food or not losing the map.

If your gaming group is also fond of darkly adult anime, then I really think you should introduce Red Giant to them. They know the tone; this RPG brings the rules.

On that note; the Quickstart Rules are free.

As horribly brutal as you want it to be: A review of the Red Giant RPG 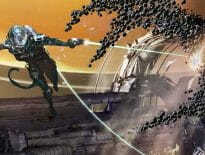 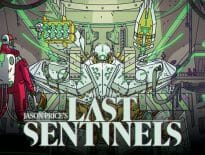