You are here: Home / Games / Tabletop & RPGs / Don’t get lost: Reach of the Roach God is an RPG campaign set in the deep places of earth

Inspired by the vast caves of Southeast Asia, Reach of the Roach God is the first campaign from A Thousand Thousand Islands. This is a Southeast Asian fantasy worldbuilding project, and the pitch, I think, is amazingly evocative.

The system-neutral setting has characters exploring villages and temples, exploring karst and cave, in the darkness and dangerous encounters with a god in chitin. The final product looks gorgeously retro. Over a thousand gamers agree, and the campaign is performing strongly on Kickstarter.

You can read a free to download ROTRG preview (PDF link) already.

There’s more about the setting A Thousand Thousand Islands on Centaur Games’ website for the project, which has the same simple aesthetic as ROTRG offers.

The porous Southeast Asian fantasy world draws on overlapping cultures, lived stories and mythology. It’s system neutral and comes with guidelines that may help you adapt it to your prefered RPG rules engine.

Centaur Games are also upfront about this being their first Kickstarter and first full-sized book.

If all goes to plan, backers will get three starter adventures for the setting, three cave-dwelling cultures, and a frame for the campaign. There are also tools for running an underground world, such as random generators. Don’t get lost in the darkness.

REACH OF THE ROACH GOD will be a tasty 23.4×15.6cm hardcover, with an estimated 200-300 pages of text and illustrations, in roughly equal measure. Detailed black-and-white line art, informed by in-depth research into Southeast Asian material culture. Show these to players, draw them into your world. Detailed jargon-free text, designed to inflame your imagination, stick in your players’ minds.

I’m curious about the currency used in the Kickstarter! The campaign is based in Kuala Lumpur, Malaysia. According to Wikipedia, the currency there is the Malaysian ringgit, which is written as RM with the currency code MYR. The subunit is the sen.

The Kickstarter tiers are expressed in S$. Surely not “Sen Dollars” as there’s no such thing. Centaur Games’ stretch goals map USD to SGD, and I think that’s the answer.

SGD is Singapore dollar, which is current S$, and which was my first guess until I saw Kuala Lumpur, Malaysia as the local. I don’t think I’ve seen Kickstarter not use a local currency as default before.

A pledge of S$37, which Kickstarter suggests is about £21 and Centaur says is about US$27, will get you the PDF of Reach of the Roach God.

At S$75/£42/USD55 plus shipping, the backer reward has the hardcover copy of the adventure added.

And that’s it. The other tiers, which were very much more expensive and included art perks, have sold out.

The expected fulfilment of the project is October 2022.

Don’t get lost: Reach of the Roach God is an RPG campaign set in the deep places of earth 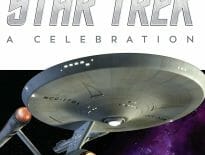 Books A look inside: Star Trek – The Original Seri… 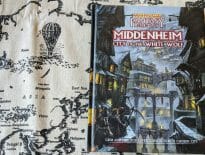