Salvage Union is a new RPG from Leyline Press, the publisher created by Aled Lawlor (Mew-Tants) and Panayiotis Lines (Shadow of Mogg).

The tabletop roleplaying game is designed with the Quest RPG system from The Adventure Guild and will launch a Kickstarter in December. The alert page for the Salvage Union campaign is already live.

Set in a post-apocalyptic world that’s not Earth but is similar to it, Salvage Union casts players as salvagers living on a towering Mech known as a Union Crawler.

On these Mechs, characters must try and scrape and survive by scouring the wastes for resources. Challenges include bio-mecha horrors, alien constructs, wasteland raiders and the Corpos, who own most of the resources that can actually be found on the land.

A free quickstart to Salvage Union is promised, and first access to that will be for people subscribed to the Leyline Press newsletter. Playtesting happens ahead of the Kickstarter launch.

Mock-ups of the RPG suggest the following aesthetics.

Your link to the KS project is broken. Fix the ref=geeknative UTM 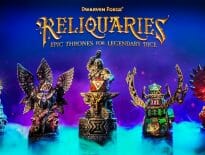 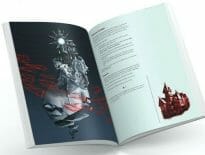