You are here: Home / Games / Tabletop & RPGs / Modify, don’t reinvent: A review of There Once Were Dragons

There Once Were Dragons is an old school vibe of a tabletop RPG from One Dwarf Army. It’s been out for a few months and has ticked up to copper best-seller on DriveThruRPG, mainly driven through word of mouth.

What designer Georgios Chatzipetros has done is to avoid reinventing the wheel but to modify it instead. We see that most clearly in the system’s mechanics, which emphasise action and loot.

If you’re looking for a tabletop clearly inspired by those hack-slash-loot computer games like Diablo or Torchlight, then There Once Were Dragons is a strong contender. Reading it made me want to dig out the village music from Diablo and have that playing in the background as I turned digital pages.

There Once Were Dragons system

There Once Were Dragons uses a d20 system, but it’s not compatible with more famous and successful d20 system.,

That means you roll a d20, add an attribute and compare that to a target number or difficulty score. In the RPG, a normal difficulty is 12, a tough one 16 and a gruesome challenge 20.

I said that this RPG wasn’t about reinventing the wheel but about modifying it. The most helpful thing to do is to call out the differences, as the RPG itself does, and if they sound like a good idea to you, you’ll probably like the RPG.

Secondly, when the dice roll requirements use a capital D (d20 vs D20), the associated dice explodes. That’s to say, if you roll the maximum value, you roll again and add the new score. This only happens once.

Thirdly, you have a natural defence against attacks or armour, but not both. Pick whichever value is higher and use that.

Lastly, initiative uses d10s and is rolled every round rather than at the start of the scene or melee. This makes a big difference, keeping the action changeable, and although I playtested with an experienced group, I suspect it won’t slow the action down terribly for many people.

There Once Were Dragons atmosphere

Vibe? Nope, already use that word too often. Here, in this section, I want to tell you what There Once Were Dragons feels like.

Sure, there are a few pages on a setting; on the world left after the war between the Aesir and Vanir, but they really don’t have much responsibility in influencing what There Once Were Dragons plays like or what it’s like to play it. The setting is almost incidental; it’s like talking about the shopping basket, not the goodies inside.

“Experience required,” I think the best way to convey what the RPG is like is to say that the game assumes (and demands) you’re not a newbie. I’ve said There Once Were Dragons doesn’t reinvent the wheel, it doesn’t even reintroduce the wheel.

The look and feel of There Once Were Dragon is simplistic but professional. We’re dealing with a single column of text, but with good spacing (or clear spacing, at least) and easy to read font. I suspect the game could have been much reduced in page count if it reduced the font size a bit and went to two columns, but it doesn’t need to in this digital world.

Equally, the art in the game is stock, but it’s good stock imagery. I’ve seen some before, but I’ve read a lot of indie fantasy RPGs! Just because another game maker agreed that one picture was powerfully evocative of a dramatic scene in a game doesn’t mean the One Dwarf Army can’t have it either.

Importantly, there’s at least some consistency in look and feel across all this art. It’s not the same as having a creative director cast a veteran eye over the work of professional illustrators tailoring work to requirements, but it’s much better than some I’ve seen.

As noted, this RPG weighs in at over 301 pages. The equipment starts before page 80 and keeps on going to about page 230.

There Once Were Dragons makes me wonder why I have groaning shelves of RPGs behind me. This game makes me question why I splash the cash on Kickstarter. Georgios Chatzipetros proves that with very little, you can do a lot.

But, sometimes, I want an RPG to have and collect (to hug and hold). There Once Was Dragons isn’t a huggable RPG. It’s a matter of fact boot-camp of a game that gets you going in a new fantasy world, either the optional one of Elethia here or one of your own design, with all that you would want to begin with and for only a few quid.

Yeah, the game could look prettier, but I think it scrubs up very well for the low cost (and the starter set is free).

There Once Was Dragons is not a wow, but it is a recommendation. This is an RPG to have in your hard drive like you would keep that screwdriver in the cupboard. There’s a practical value in owning it. You’ll regret not having it that night when you need to quickly reach for its utility, and it does the job at hand very well.

Disclaimer: My copy of There Once Was Dragons was provided for review.

Modify, don’t reinvent: A review of There Once Were Dragons 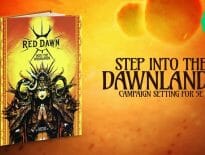 Tabletop & RPGs Feel the darkness: Red Dawn – Into the Dawnl… 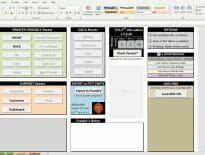