There’s no shortage of generous and free to download previews for Legendary Games’ Boricubos: Latin American Monsters and Adventures. The publisher has also been abundant with diversity, and cultural wisdom as nearly 20 Latinx authors are involved with this bestiary for Central and South American monsters and a companion Caribbean setting.

Both books are available for D&D’s 5e, Pathfinder’s P1 and P2. The campaign is currently at about x10 the asking price, has over 900 backers and has three weeks to run. You can see the tally and join in on the project page.

Search engine willing, you can find the associated previews on DriveThruRPG. However, just in case, here are the direct links;

Legendary Games have been on the raw end of gamers and cultural sensitivity before. They’ve clearly made an effort to get this bundle right while not backing away from the idea of real-world inspiration for fantasy games.

The legends of the Taino and Arawak peoples of Puerto Rico and the Caribbean inspire the adventures on the archipelago of Boricubos: The Lost Isles.

New races like avian iguaca, the croaking coquían, the fiery wolákan and thundering hurákan are added along with 100 new archetypes, feats, spells and the new shaman class for 5e and P2.

If you want just one of the books and want it in digital, then a pledge of $18 will unlock that. It’s up to you to pick the tier that maps to the book (the setting or bestiary) and the ruleset.

The same process and careful clicking apply if you want the softcover, find the matching $27 pledge and make your selection. The PDF is included.

If you want both books, for one rule system, and want them in digital, it’s $30.

Now, if you want both books in softcover, it’s $55, but once you hit $99, there are hardcover options available as rewards.

There are other tiers available, and they’ll all are estimated for completion around February 2022. 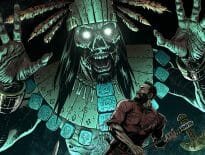