You are here: Home / Games / Tabletop & RPGs / Not a vanity purchase: Death on the Reik Companion review

This review is the companion piece for Geek Native’s Death on the Reik review.

The Companion itself extends the “director’s cut” metaphor to describe the re-release of the Warhammer Fantasy RPG adventure by using terminology such as “Deleted Scenes”, “Guest Commentaries”, and “Behind the Scenes”.

I’m going to contend that the Companion is a bit more than that. Firstly, I have to argue that those steelbook blu-rays, extended edition DVD slipcases, and special editions are intended as collector’s items for hardcore fans. They’ll be a great addition to your set. Yes, you’ll learn some trivia, some geek culture, but that’s essentially all vanity. You don’t need them. You want them.

For example, chapter one – straight out of the gate – is about Herbs and Their Uses. There’s art! Cubicle 7 have illustrated plants to help you bring your Death on the Reik adventure to life. So you have something to show your players. We know how rare these herbs are, where they might be found and what they do.

If this isn’t a section that’ll be incredibly useful for busy GMs fantasy settings where player characters might need to live off the land or at least dig up some emergency medicine, I don’t know what could be.

What do you get in a Companion?

While I argue that Death on the Reik Companion has utility, I accept that it is designed for completists and collectors to embrace.

There’s a concept in the computer game business along the lines of 0-1-100 in which the game designers make their games available for free but make it easy to spend one dollar (such as a Halloween head for your character) and possible for the superfans to pay $100 (such as ordering an art book). I see echos in that in Cubicle 7’s approach to Warhammer. There have been freebies, and there have been the high-end purchases like the Soulbound Collector’s Edition, the Death on the Reik Companion is evidence that you don’t need to lean on the superfans for $100, that you can appeal to them with quality instead.

The Death on the Reik Companion is $35 from C7 directly.

What you get are rules and tweaks that mean you can safely run the Death on the Reik campaign for grognards who have played the original (they’ve had 30 years to do so!) and still surprise them. They’ll probably underestimate the threat.

The Warhammer centric chapters discuss the Empire’s Rivers and Patrols. There’s extra help with The Red Crown, The Emperor Luitpld, Vengeance of the Gravelord and even the signal tower scene as the Companion discusses the Imperial Semaphore Service.

The more generic chapters discuss river navigation, including boat damage, weather conditions, and handling vessels. Finally, a separate section gets into how to upgrade boats, what that costs and what the upgrades do.

A particular favourite of mine is the trading rules. These expand on the basics of buying and selling and get into life as a merchant. The whole group of adventurers in Death on the Reik may decide to become as wealthy as possible through their travels from marketplace to imperial marketplace, so these rules are equally likely to be very helpful.

Cruelly, another favourite generic chapter (after the herbs), is the section on smugglers, pirates and ship wreckers.

While I don’t believe Death on the Reik’s Companion weighs in at collector’s costs, and it doesn’t have golden pages (like Soulbound’s collector’s edition), I feel like the quality is up there at the collector’s level.

The NPCs are described brilliantly, which is to say quickly, cleanly and yet with strong personalities. Stat blocks are easy to find, read and use.

Creatures are memorable and feel entirely appropriate to the setting.

The layout here is top-notch. The quality of production matches. My main grumble with the Companion is that I sometimes think I’ve turned two pages by accident. I haven’t; it’s just that the paper quality is that thick.

Hopefully, the generous quantity of my lousy photography and hastily acquired props for decoration help reveal some of the professional design skills in the book. Even if it’s only through an embarrassing juxtaposition at my expense.

I will make the case that there’s far more utility here than many people might expect. In fact, I predict with confidence that the Death in the Reik Companion will be taken off my shelves and opened far more often than the main book. I fully expect to use the Companion as a resource for other adventures.

The Death on the Reik Companion isn’t a vanity purchase; it’s not an impulse buy, and nor is it something you’ll have only to complete a set. Instead, this book is one that you’ll want, use and appreciate having.

Please note: My copy of Death on the Reik and the Companion came to me free from Cubicle 7.

Not a vanity purchase: Death on the Reik Companion review 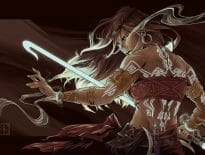 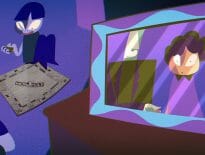