When the Defiant RPG came out, I bought a copy and published initial thoughts on the very same day. It was easy to do; Defiant was good enough to make me excited.

In Defiant, you are a defiant and powerful supernatural that did not join in the apocalypse and protected your favourite city instead. You are not alone, others did the same, and now you rule your pocket empire with a combination of guile, diplomacy, romance and strength of arms.

There wasn’t a hardback or even any physical copy. Game Machinery, the publishing vehicle for The Witcher co-collaborator Katarzyna Kuczyńska and Marcin Kuczyński, weren’t sure the TTRPG would be popular enough. It was, and now the Kickstarter to fill that gap is 150% funded, and climbing.

One way to quickly check out Defiant is to grab the 291-page and entirely free to download Defiant Awakening. This generous download is the RPG’s quickstart.

Defiant RPG is an urban fantasy game about the mighty, modern-day supernaturals, who rebelled against their destiny and, instead of destroying the world, decided to protect it. By enforcing a demanding set of rules, the Defiant aristocracy empowers protective seals around their cities, making them the only safe-havens in a world ravaged by the Apocalypse.

However, I think this latter snippet from the summary better explains the attraction of the game;

In Defiant, your Characters are walking a thin line between satiating their desires and following the dystopian laws of their uncanny society. They share a unique position as supernatural aristocrats, ruling over their Holdings, empowering their Domain with the strength of their passions. You will be playing to find out who your Character really is, and what they are truly made of. What will the Characters do with all the power that has been given to them? How much are they willing to sacrifice to do what is right? How many rules are they willing to bend to get what they want?

As a fan, this Kickstarter comes out when I may not be able to afford it. It’s the exclusive and printed only once cover that tempts me the most, but to get it, I also get the regular hardcover, and it’s not cheap. Even then, this “regular” hardcover has additional content, not in my original digital edition.

Backers can go even higher, hitting PLN 744, adding exclusive access to the Defiant Authority community and beta access to all future Defiant projects.

The digital-only rewards are expected to be fulfilled this year in November, whereas the physical copies are due next year around February. 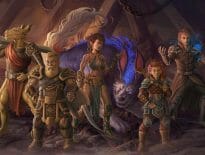 Tabletop & RPGs Poll: Would you buy your D&D books all over a…