You are here: Home / Games / Tabletop & RPGs / D&D leaks: The Wild Beyond the Witchlight & Curriculum of Chaos

Once again, D&D’s release schedule has been exposed by Amazon retail listings.

Unusually, even for the fairly common occurrence of a leak, Amazon has descriptions for both books.

The Wild Beyond the Witchlight: A Feywild Adventure

The Wild Beyond the Witchlight is D&D’s next big adventure storyline that brings the wicked whimsy of the Feywild to fifth edition for the first time. Tune into D&D Live 2021 presented by G4 on July 16 and 17 for details including new characters, monsters, mechanics, and story hooks suitable for players of all ages and experience levels.

Curriculum of Chaos is a D&D / Magic: The Gathering crossover and adventure book. Amazon describes it;

Curriculum of Chaos is an upcoming D&D release set in the Magic: The Gathering world of Strixhaven. Tune into D&D Live 2021 presented by G4 on July 16 and 17 for details including new character options, monsters, mechanics, story hooks, and more!

The books are the first since Ray Winninger and team announced surprises coming.

On the new D&D Studio blog, in April, the D&D team noted;

Later in the year, Chris will return with our big summer adventure, James Wyatt will deliver a substantially improved version of a concept that I initiated myself, and Amanda Hamon will close us out with a project that was jointly conceived by herself and several other studio members. As usual, Jeremy Crawford is working with all of our leads, overseeing mechanical content and rules development.

In addition to these five major products, look for a couple of additional surprises we’ll unveil in the months ahead.

Historically, it’s been pretty hard for Wizards of the Coast to line up products for pre-order while also keeping them secret.

So we know Chris Perkin’s Summer adventure, no one is surprised that it’s Feywild themed, and it seems likely Strixhaven is the last major D&D book for 2021, so that would be Amanda Hammon’s book, but James Wyatt’s between them is yet unannounced. It’s odd announcing Amanda’s before James given his is likely to come out first. I believe James Wyatt’s book is a FR setting book, with a Draconic spin.

D&D leaks: The Wild Beyond the Witchlight & Curriculum of Chaos 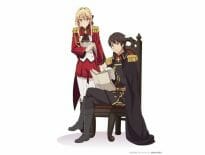 Anime Logistics geeks are cool: How a Realist Hero Rebui…

Sites Audio EXP: #99 – The new Marvel TTRPG and it…
wpDiscuzComment Author Info
Manage Cookie Consent
This site uses cookies 🍪, and links are ads that may earn bloggers some money 💰, and with this alert, I very much hope that these dark truths 🧌 are acknowledged.
Manage options Manage services Manage vendors Read more about these purposes
Preferences
{title} {title} {title}
Loading Comments...